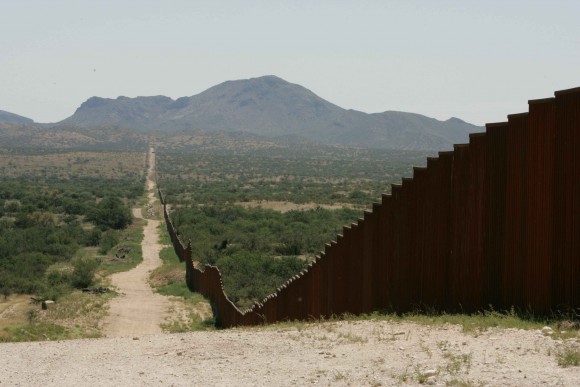 Imagine this: You are ten years old, and more than anything, you are scared. Since you were young you’ve been sick, but your mom has always been there to take care of you – to make you feel safe. Only, this time, things are different. You have to get surgery and your mom can’t be there. Otherwise, she could get caught by the bad guys: border patrol. Your mom told you that if she goes with you she might not be able to come home. But, if you go by yourself you can get through, at least she hopes. From the way she sees it, you aren’t a threat to the bad guys. So you go, with your cousin by your side. But still, it’s not your mom. When you get to the checkpoint your heart skips a beat – they actually stop you. Your cousin tries to explain the situation to them and it seems like they understand. They let you go. As you drive off, you look out the window and realize something. The bad guys are right behind you.

Now imagine if this actually happened to someone.

On Tuesday, Oct. 24, 10 year-old Rosamaria Hernandez was detained by border patrol, except this was not a routine detainment. Hernandez, as told by an article in the New York Times was on her way to undergo a gall bladder surgery at Driscoll Children’s Hospital in Corpus Christi, Texas. Border patrol allowed her to pass through and followed her to the hospital, where they waited outside of her room to detain her.

According to the article, Hernandez suffered from cerebral palsy and it was necessary for her to seek specialized treatment in Texas. Her mother said that she was focused on making sure her daughter was going to be okay so she never expected any of this would happen.

This instance of detainment can be described in three words: waste of resources. By following Hernandez, who is clearly not a threat to the United States in any way, not only were they wasting her time when stopping her in the ambulance, but also misusing their power. If anything, the decision to pursue Hernandez makes border protection look lazy and cowardly. They could be attending more pressing matters, but instead decided to harass a young girl with special needs. Nearly 340,000 arrests or detainments are made in a year by border patrol. However, around 19,000 of those apprehended are considered “criminal aliens.” This means that less than 5 percent of those taken into custody by border patrol are actually a threat. The rest are likely to be innocent people in pursuit of a better life.

It’s virtually unheard of for an unaccompanied minor who lives in the United States, like Hernandez, to get arrested. So why did it happen? Were they bored? Did they actually have logical reasoning for following her?

Due to the threat of deportation and detainment, Hernandez’s parents were unable to accompany her when she was rushed to the hospital. While a cousin accompanied the young girl, it is still unjust and cruel for her parents to be forced to leave their daughter.

The fact that Hernandez’s parents were so afraid of what might happen to them, might they go to support their daughter, speaks volumes to the kind of unjust treatment Hispanics face in the U.S. Not only are they slandered as criminals, but they are not even being treated as humans; humans who deserve the right to feel safe. A situation where people are forced to choose between assisting a suffering loved-one and their own safety should not be an issue at this point in time.

This is not to say that all border patrol should be seen as villains. In this particular instance, they need to reevaluate their values. They seem so caught up in doing their job that they forget that everyone is human. Sometimes, all it takes is putting oneself in another’s shoes: empathy.