Scarcity thinking broken down at CU Diversity and Inclusion Summit 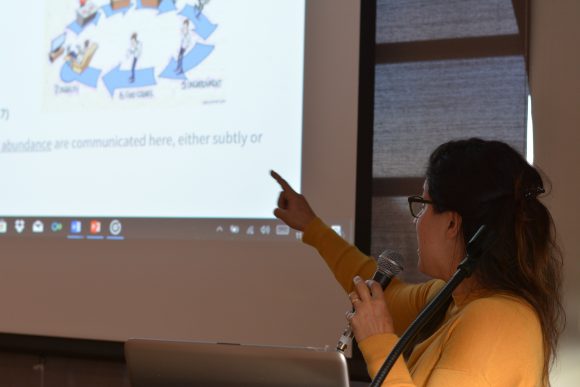 Members of the International and National Voluntary Service Training Community Studies department introduced the concept of scarcity thinking and its harmful effects at both the personal and policymaking level on Wednesday.

Scarcity thinking, as defined by speaker Sam Bullington, is a mindset in which people believe there is not enough resources to go around, leading to valorized competition. This concept is reflected more broadly in the perception of groups of individuals attempting to sabotage the chances of another’s success.

The approach to viewing life as a big game of musical chairs in which one must be constantly alert of their status, plays a prominent role in American ideology, Bullington explained.

“When we think of all the tremendous resources that are being put into protecting ourselves against one another, rather than human well-being, we can see how we can begin to change the world,” Bullington said.

Examples of scarcity thinking were then shown, including a snippet from the Heritage Foundation’s description of the DACA program and a New York Times op-ed on human migration. The connotations of the language used in these articles were highlighted as instances of the scarcity mindset and how media messages perpetuate it.

The session also included discussion time, where those in attendance could suggest concrete ways to lessen the presence of scarcity thinking and bring awareness to the subject.

“Any kind of conversation regarding how to dismantle this harmful image or this very ignorant image is really beneficial,” said Isaiah Otero-Tercero, CU student. “Just starting the conversation is a really good step.”

Effective communication strategies for bridging gaps in awareness between individuals were also discussed.

CU student Luz Macias suggested that the idea of scarcity thinking and its greater societal implications can be best approached — by those who may not have previously considered the idea — with grace and understanding. Grace, Macias believes, is a component of being aware of one’s privileges and how people are largely products of their environments.

“Being cognizant of privilege is understanding our own educational privilege, what it means to be in the ivory tower … what it means to code switch, to change my language when I’m in a community that doesn’t understand me speaking like this,” Macias said.

The session concluded with the question of how scarcity thinking can be interrupted when it appears in national and community discourse, followed by the speakers’ suggestions to denaturalize competition, consumption and defense.