Opinion: An update on the Buffs trajectory 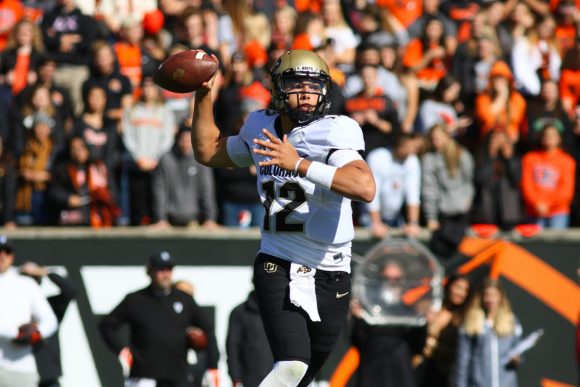 What goes up, must come down.

The Colorado Buffaloes’ extraordinary 2016 season is something that every Colorado fan will remember. Had you told somebody last August that the Buffaloes would achieve 10 wins, a Pac-12 South Division title and an Alamo Bowl appearance, you’d sound like a lunatic.

But right now, what doesn’t sound crazy is the Buffaloes not making a Bowl game at all.

Colorado survived a close shave against the Oregon State Beavers Saturday. It was their first Pac-12 victory of the season, and it put them at a 4-3 overall. After dropping their first three conference games, the win is a very small comfort — especially considering how perilous the upcoming schedule is.

I will admit, I was sorely mistaken in my preseason prediction of Colorado finishing second in the Pac-12 South Division. To me, it now seems like the defending South champs are inferior to every other team in their division.

The upcoming trip to the northwest to play Washington State, followed by a tough home matchup with USC and an excursion to Utah, all seem like unlikely wins at this point.

Taking those potential losses into consideration, Colorado’s path to a bowl looks incredibly rough. They would need to beat California during homecoming week and Arizona State in Tempe, games against two sleepers in a conference filled with parity.

Both defensive units for Arizona State and California were extraordinary in their upset victories over Washington and Washington State, respectively. Both teams were able to create havoc in the pocket against Jake Browning and Luke Falk, two elite quarterbacks that were made uncomfortable by heavy pass rushes. Arizona State recorded nine sacks against the Washington Huskies, while the Bears claimed five.

Considering the lackluster pass protection from the Buffs this season, the pass rushing performances from both these underdogs should make Buffs fans wake up in a cold sweat.

Colorado quarterback Steven Montez is talented enough to make good throws on the run, but this hasn’t been the recipe for consistent success. The offensive line simply hasn’t done enough this season to help the talented wide receivers skilled in the passing game.

And I’m not sure if you’ve noticed, but this defense clearly isn’t run by former defensive coordinator Jim Leavitt. In his place is D.J. Eliot, who, to his credit, took over a Colorado defense that lost three elite secondary members to the NFL draft. But the results so far in his first year as a Buff are still subpar.

Last season, Leavitt helped lead the Buffs to an exceptional defensive campaign, as Colorado ranked second in the conference in both total defense and pass defense. The Ducks, meanwhile, ranked second to last in total defense prior to Leavitt’s arrival. Now, they have jumped to fourth in the Pac-12 in total defense, despite having to play offensive powerhouses in Washington State and Stanford.

Eliot’s defense this year, in comparison to last year’s with Leavitt, is inferior. Last season, Colorado allowed 342.5 yards per game — this year they’ve allowed 424.3 through seven games. That’s a decrease in defensive production by 81.8 yards per game.

The Colorado defense is talented in certain areas. Junior Isaiah Oliver is arguably one of the best corners in the country, and sophomore linebacker Drew Lewis is showing great potential. But they just might be missing the fire, inspiration and expertise that Leavitt previously bestowed upon the Buffaloes.

With the situation that Colorado’s in, and the opponents they still need to face, don’t be stunned if they miss out on a bowl game. They’re certainly not the same team as they were last season, and it’s about time for fans to come to terms with that fact.