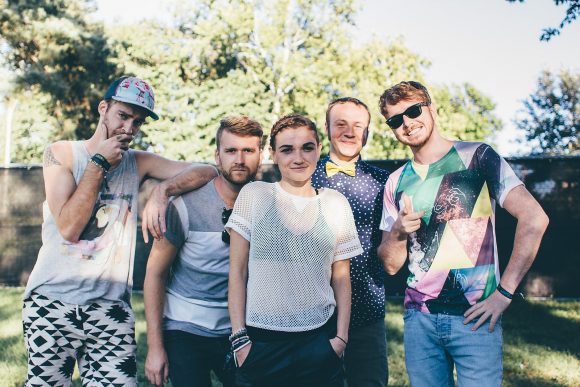 On Wednesday, MisterWives sold out the Boulder Theater. The Boulder Theater may only be a 1,000-person venue, but selling out a venue their first time in a city is a big deal for any band. Of course, MisterWives was not the only band that played that night. Vinyl Theatre out of Milwaukee and Smallpools from Los Angeles opened for MisterWives.

Vinyl Theatre was the first band to take the stage Wednesday night. When they opened up their set with two songs off their album, Origami, you could feel the unfamiliarity in the room. The band brought an amazing energy, but it was not until they played their breakout single “Breaking Up My Bones” that the audience really started to figure out who Vinyl Theatre was.

Following “Breaking Up My Bones,” the band kept the crowd energized with a seemingly random, but very well executed cover of Eminem’s “Lose Yourself” featuring vocals from keyboardist Chris Senner. The rest of their set was filled with high-energy songs including the first single off Origami, “30 Seconds,” and their most recent single, “Me, Myself, and I.”

Smallpools took the stage from Vinyl Theatre and immediately had fans singing along. Smallpools has reached radio success a few times since 2013, gathering a dedicated fan base.

The first song that really seemed to make an impression on those who hadn’t heard Smallpools before was “Passenger Side.” It had amazing energy throughout the song. I found it interesting that their set featured a seamless transition from their song “Mother” to a cover of Radiohead’s “Creep.”

The last two songs of the set were the songs that led to Smallpools’ radio success. For their most recent single, “Million Bucks,” the band featured Dr. Blum of MisterWives on trumpet and threw what appeared to be real money into the crowd. The last song was their first hit single, “Dreaming,” which had the whole crowd full of energy while they sang.

MisterWives blew me away before they even walked onstage. Their setup was incredible. The backdrop was composed of white geometric shapes, much like the ones on the cover of their most recent album Connect the Dots. The shapes changed colors with the changing lights. Additionally, every member of the band, with the exception of lead singer Mandy Lee, was dressed in all white with colorful geometric shapes.

Beyond their incredible aesthetic appeal, MisterWives had a ton of energy on stage. Their recent single, “Machine,” got the crowd super energized. Between motivating talks between tracks and uplifting songs, MisterWives kept the crowd engaged. Some major highlights from their set included a mashup of the Twenty One Pilots’ hit songs “Heavydirtysoul” and “Ride” and a drum feature at the end of the set. MisterWives’ Connect the Dots Tour was engaging and energetic from start to finish.

You can contact CU Independent photographer Angela Smith at ansm4295@colorado.edu.