Colorado struggles to attack, falls to No. 6 USC 2-0 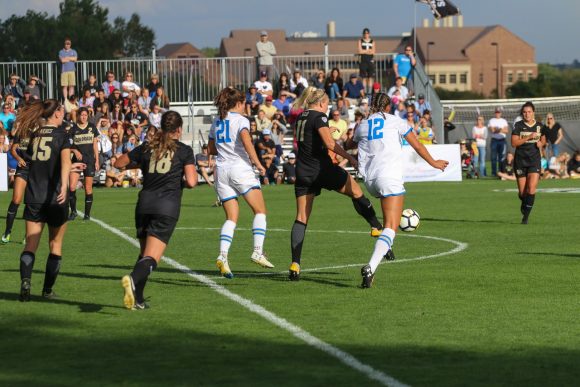 Midfield Alex Vidger clears the ball away from the goal in a game against UCLA. Sept. 22, 2017 (Fiona Matson/CU Independent)

On Friday, the Colorado Buffaloes women’s soccer team was hosted by the No. 6 USC Trojans at McAlister Field in Los Angeles. It was the third straight week the Buffs were matched up against a Pac-12 team ranked in the top 25. After a long fought battle, the home team came away with the win, 2-0.

The Trojans came out firing on their home field, as freshman forward Tara Mckeown sent in a looping cross that was met with the sweeping leg of senior forward Alex Anthony. Anthony was able to rifle one past goalie Jalen Tompkins to put USC up early.

Unfortunately for the Buffs, the Trojans didn’t let up. In the 16th minute freshman midfielder Savannah DeMelo put a ball right on the foot of fellow midfielder Sydney Sladek who was able to tuck it away and give USC a comfortable two goal lead early in the second half.

Coming out of halftime trailing 2-0, the Buffs came out with a spark, putting pressure on USC and sending players on the attack. The Trojan defense proved to be too strong however, as the Buffs failed to find a crack in USC’s defensive armor, even with senior goalie Julie Murphy getting her first career start in between the pipes for the Trojans.

The Buffs were able to manage nine shots total, of which three were shots on goal. The Trojans looked dominant in the attacking third, putting up an impressive 23 shots, eight of which registered as shots on goal.

Towards the end of the game, the Buffs got some of their best looks on goal. In the 83rd minute, senior midfielder Becca Rasmussen set up a good chance. However, freshman forward Marty Puketapu couldn’t strike it properly, making it an easy save for Murphy.

Shortly after that, CU junior midfielder, Cassie Phillips, belted a scorching shot from the edge of the box that hung in the air just a bit too long and rattled the crossbar.

The Buffs have been held without a win in their past four games, and perhaps more importantly, without a score. Pac-12 play has proven tough for the Buffs, as they fall to 1-4-1 in conference play.

The storming No. 6 Trojans now move to 11-1-1 on the season, while the Buffs fall to 7-5-3. The Buffs will look to snap their four game losing streak and get their first conference win since beating Washington State back on Sept. 28.

That Washington State game was the last time the Buffs were able to find the back of the net. We’ll see if the girls can bounce back from being shut out in four straight games when they play host to Arizona State on Oct. 19 at Prentup Field in Boulder.