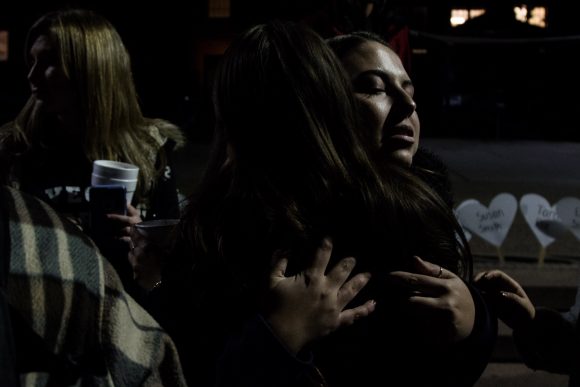 A row of 58 hand-cut hearts adorned the steps outside of CU’s University Memorial Center on Wednesday evening in remembrance of the Las Vegas shooting victims.

The vigil attracted 60 to 80 students and community members wanting to show their support. The CU Student Government helped organize the event after student Morgan Lombardo came forward with the idea. Her father is Joe Lombardo, the acting sheriff of Clark County who is in charge of the ongoing investigation into the shooting. After seeing the impact this tragedy had on her father, she decided to approach CUSG with the idea of a vigil to honor of the victims.

“Fifty-eight is easy to think of as a statistic, but it’s not: It’s lives,” Lombardo said to a silent crowd of students, police officers and reporters. “Cutting the hearts made me realize how many 58 people really is.”

Carter Gruba, one of CUSG’s three executives, said Lombardo came to them with the idea to hold the vigil last Friday.

“When Morgan suggested the idea we wanted to help make it happen,” Gruba said. “We’re really focusing on the victims.”

Jacob, a freshman in the crowd, said he was there to support his friends who live in the Las Vegas area. He couldn’t believe this could happen in his home state of Nevada.

Megan, a sophomore student in attendance, also holds a personal connection to the tragedy.

“I’ve personally been a victim of gun violence so it really hit home,” she said.

Megan was pleasantly shocked by how many people showed up to the vigil and lamented that there wasn’t more they could do for the victims.

Glow sticks were passed out. Hot chocolate brewed by Lombardo herself was provided to supporters after the vigil. Lombardo ended the evening by thanking CUSG, the crowd and the CU Police Department.

Correction: The article previously stated that the person behind the vigil was Megan Lambardo. It has been corrected to Morgan Lombardo.