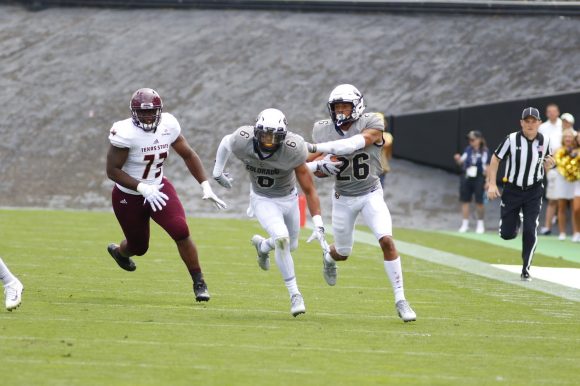 Worthington blocks for Isaiah Oliver as he runs the ball down the field. Sept. 9, 2017 (Phil McKenzie/CU Independent)

The Colorado Buffaloes’ defense has become one of the main talking points of this football team. CU’s defense is earning most of the headlines for a reason.

With Colorado’s 41-21 win over Northern Colorado last weekend notwithstanding, the Buffs defensive 11 only allowed three points in each its first two games of the season.

Junior defensive back Evan Worthington has been a key contributor to this well-oiled machine.

The expectations were high on the Aurora, Colorado, native, having to replace a piece of the stellar secondary from last season.

“I definitely felt a lot of pressure,” Worthington said. “I was nervous coming into the first game, but once I got into the game and got comfortable, it just felt great.”

“I was definitely disappointed,”  he said. “But what I’ve learned was that you always have to be focused and be on top of everything you do, even if it’s not football related.”

Worthington’s season got off to a fine start. He claimed an interception in the third quarter against Colorado State and has claimed 20 tackles in the team’s three games. This great start can be attributed to his versatility in the secondary, as he can play a wide variety of positions.

He can play the strong safety, free safety, nickelback and Buff-back positions, with Buff-back being a combination of outside linebacker and safety.

“I’ve got size, speed and I can just play anything they want me to play so if they throw me in there, I’m gonna make plays,” Worthington said.

“We had too many mental busts,” Worthington said. “We’re going to be in that film room all week even more than ever before.”

The time in the film room may be critical as they will face the No. 7 Washington Huskies to start Pac-12 Conference play this Saturday at Folsom Field. One of the threats Colorado’s secondary will have to contend with is the Huskies’ senior wideout and punt return specialist Dante Pettis.

“He’s definitely a threat with a lot of speed and good size.,” junior defensive back Isaiah Oliver said. “In my opinion he’s one of best receivers in the Pac-12.”

Head coach Mike MacIntyre explained how Worthington has become an integral part of the defense that has a large test on their hands Saturday night against the Huskies.

“He’s extremely vital to us,” MacIntyre said. “He’s an excellent player with all the skills and athletic ability. He’s really matured as a person too, which is fun to see so he’s done the same on the football field. He’s a big guy … he can run and play our nickelbacker, our buff-backer and our safety. We’re able to move him around and utilize him [and] he’s a huge key for our success on defense.”

If Colorado fans were asked the question “who’s the best defensive player on the team?” most might answer Isaiah Oliver for his playmaking ability.

But how about the most valuable defensive player? Worthington’s name could be in the conversation for that title. His versatility and his ability to make tackles at the safety position could become essential for this impressive defensive unit throughout the season.

The Buffaloes and Huskies face off this Saturday evening at Folsom Field. Kickoff is at 8 p.m.