Fossil Free CU is a student group on campus advocating for CU’s divestment, or removal of investments, from the fossil fuel industry. They maintained the sit-in at the University Administrative Center since Thursday by rotating members in and out. Before settling into the UAC, they held sit-ins around campus last week, including at Old Main last Wednesday. They decided to move to the UAC to be more visible to the chancellor and his cabinet.

Dean of Students Akirah Bradley and Assistant Dean of Students Jennifer McDuffie presented a letter Wednesday from the chancellor to Lior Gross, one of the undergraduate student leaders of the activist group. The deans then told Gross, the only student at the sit-in at the time, that they had to leave immediately or risk arrest.

CU Boulder police removed the possessions from the conference room where the group settled in for the protest. The students were not notified of the location of their belongings until 7:14 p.m., at which point they received an email detailing that they could be picked up at the UMC after showing photo identification.

“We’ve had plenty of dialogue,” said Ryan Huff, spokesperson for CU, adding his opinion that the students stayed in the building long enough and that the sit-in was disruptive of the building’s functions.

The letter administration gave the group was an edited version of the original letter that Fossil Free CU presented to the chancellor at their meeting Tuesday. The original letter, written in collaboration with Regent Linda Shoemaker, was formatted for the chancellor to modify and release to address Fossil Free CU to say definitively whether the university would remove its investments from the fossil fuel industry. The group’s goal in protesting was to push the chancellor to publicly take a stand on that question. The edited, officially released letter by the chancellor said that CU supported students taking “non-violent direct action” to advocate for environmental justice. Additionally, it said that the chancellor supported that the group work with the board of regents on divestment. 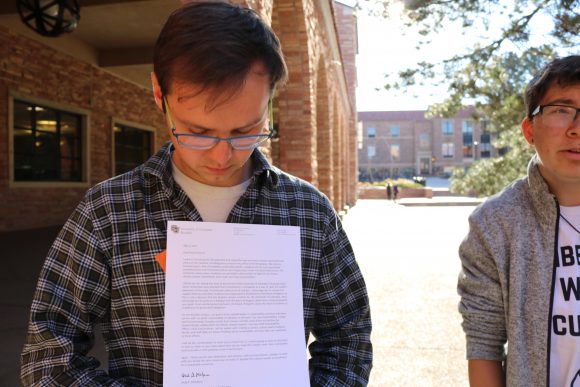 The letter thanked students for the “peaceful and respectful way” they carried out the sit-in. The chancellor went on to encourage students to continue a dialogue with the regents on divestment, but he did not give direct support for that action in the way that the group had hoped.

“[The chancellor] doesn’t have the authority to do it and he’s not the person in a position to make that decision,” Huff said. “He’s said that all along.”

After their meeting with the chancellor Tuesday, many members felt hopeful that a resolution could be reached that would please all parties. They understood that the chancellor could not directly make the choice to divest, but hoped that he could advise the regents to do so. Since the beginning of the protest, they planned to continue the sit-in until they received support of divestment from the chancellor.

“This clearly shows me that the administration has chosen a side, and it’s not the side of the students,” Gross said. “After a lot of the work we’ve been doing, knowing we have the support of the campus behind us, and to have the administration treat students this way after all we’ve done is be respectful, without any notice or giving us time to pack up our stuff, that they could just kick us out — this was not expected at all.”

Fossil Free CU members said they think CU administration took advantage of the fact that Gross was the only student in the building at the time. The group also alleged that administration used Gross’ status as an undergraduate student against them throughout the sit-in, starting with the group’s action at Old Main last Wednesday.

“They know Lior didn’t want to be arrested,” said P.D. Gantert, a recent CU graduate and a leader of Fossil Free CU. “The entire action they’ve been holding everything above Lior’s head. They said as the main student leader, everything’s on [Lior’s] head, and [they] could be looking at university sanctions for activities here. They’ve threatened academic probation.”

Fossil Free CU plans to hold another action on Friday.