On Tuesday, the University of Colorado Staff Council hosted its first town hall of the year as part of the spring 2017 Diversity and Inclusion Summit. In this meeting, plans were laid out to encourage more diversity and inclusion on campus.

Kelly stated that the desire to foster CU’s status as a sanctuary campus stems from the Trump administration’s recent travel ban and the deportation orders currently affecting undocumented immigrants.

He also pointed out that CU doesn’t give paid maternity leave to pregnant women, nor does it give men time off to spend with their newborns. He noted Colorado State University gives mothers three weeks paid maternity leave and argues that CU should make efforts to do the same.

Another issue highlighted by Kelly is that students attending Boulder pay money into the overarching University of Colorado system, but can only use it towards the main campus. He argued that students who wish to should have the flexibility to use the money they pay in tuition to attend the branches of the university in Denver and Colorado Springs. He said the staff council plans to meet with the CU Student Government, as well as the Boulder Faculty Assembly, to address this concern.

Afterwards, Kelly turned the meeting over to Alphonse Keasley, assistant vice chancellor for the Office of Diversity, Equity and Community Engagement. Keasley emphasized the importance of inclusion in creating a more productive college environment.

“With regard to inclusion, we’re interested in allowing people to be authentic with themselves and, thus, with their work,” Keasley said. “The executive order, when we have immigrants on this campus, makes it harder for them to be authentic and, thus, themselves.” He also remarked that diversity and inclusion is not just about the CU student body, but everyone who is involved with the campus.

Keasley said the most important thing the staff council can do is communicate with the different departments in order to generate dialogue among them and bring them together to form new ideas and plans. “This is a grassroots effort, it’s not something we’re dictating,” he said. “If we could get 20 departments to work together at some point, that would be fantastic. But for now, we’re trying to get people together in a similar kind of town hall.” 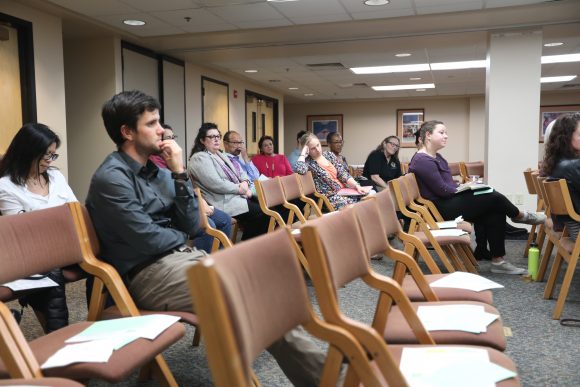 In the past, there seemed to be a lack of communication and effort from CU staff members. This was partly due to the fact that many were unaware that the staff council was holding meetings, or even existed in the first place. According to Keasley, the town hall was organized during the Diversity Summit in order to raise staff awareness of the staff council, and inform them of their professional benefits.

According to Kelly, there will be a forum to inform staff members on how they could attend the next council meetings scheduled for March 8. He also said there will be an open-forum meeting with Chancellor Phil DiStefano on March 21 and a meeting with Rep. Jonathan Singer on April 21.

Jesse Hughes is a senior in Broadcast Production and News.