Outside of polls at CU Boulder, Venezuelan Trump supporter waits to talk with voters

As people cast their ballots in the UMC on the CU Boulder campus, a Venezuelan Donald Trump supporter sits just beyond the 100-foot electioneering boundary to speak with voters about her chosen candidate. Proudly donning a “Make American Great Again” hat, Vanessa, who did not wish to provide her last name, hopes to demonstrate that Trump supporters can exude tolerance and engage in civic debate.

“I choose to wear the hat because I think a lot of people have the perception Trump supporters are intolerant,” Vanessa said. “And I want that to not be true.”

Vanessa’s personal experience with the immigration process informs her support for Trump.

“I am a legal immigrant, so I find illegal immigration a huge problem just because of what I had to go through,” she said.

Vanessa faced several hardships while obtaining a green card, including having to prematurely marry her now husband, Colin, who was working as a poll watcher just over 100 feet away.

Both she and her husband share concerns about the electoral process. Although Vanessa recognized the unlikeliness that election fraud will take place at a large scale, she expressed concern about the issue.

“You can’t buy alcohol with your [CU Boulder] ID, why should you be able to vote [with one]?” Vanessa said, regarding a potential flaw in the electoral process.

She said her fears about the election are rooted in her own country’s turbulent past. In the U.S., for example, it seems far too easy for people to falsely register.

Trump has hailed voter fraud as a means of rigging the election against him, even though only 31 credible instances of voter impersonation occurred within the pool of 1 billion votes cast since 2000. 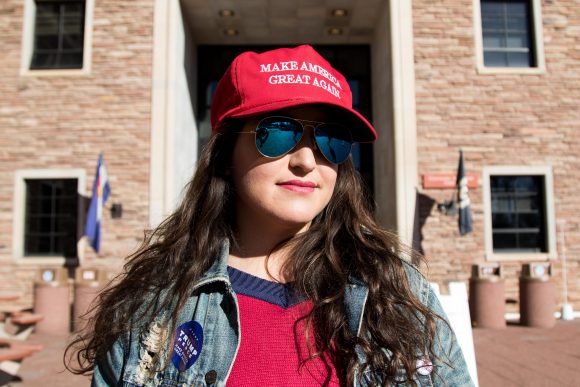 Vanessa waits to speak with voters outside of the 100 foot electioneering boundary. (Jackson Barnett/CU Independent)

Vanessa expressed hesitancy about honoring the results of the election in the event of a Trump loss. Without a thorough study of voter names compared with Social Security numbers, she will have little faith that the U.S. system produced accurate results.

A believer in limited government and an original Rand Paul supporter, her political ideology stems from her mistrust of the large, socialist government system in control of her home country.

Today, she hopes to communicate the desperate situation in Venezuela to U.S. voters. Currently her country is in a food crisis, spurred by the plummeting value of their currency.

“Venezuela is falling apart because of big government and consolidation of power. Now people are starving to death,” she said.

Opinion: Why sports were a big relief in a...

Opinion: The photographs I wish I was posting from...