With the election approaching, students are likely used to being stopped in between classes by people with clipboards offering to help them register to vote. But they were in for a surprise today when volunteers led with the question, “would you like to register to vote with an Olympian?”

Michelle Kwan, two-time Olympic medalist and five-time world champion, visited the Boulder campus during one of four stops at various universities across the Front Range. Kwan spent time on campus talking with student voters about the upcoming election and helping them register to vote.

As she assisted them with the registration paperwork, Kwan joked with students about Friday’s Rocky Mountain Showdown against CSU and was quick to bump fists or exchange a high five with whomever she met. She was also happy to pose for a multitude of selfies and silly photos with students. 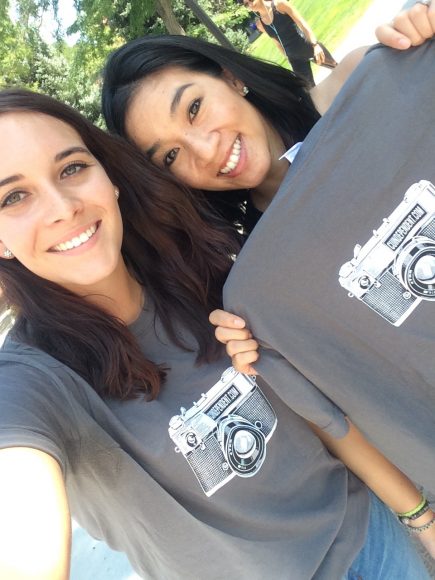 “Being here brings back a lot of memories,” Kwan said.

Today was the first time the former figure skater had been back to Colorado since graduating from the University of Denver in 2009. Kwan was accepted to Colorado, but chose to complete her graduate studies at DU because she loved the location and large number of graduate students.

“I didn’t want to feel like one of the oldest people on campus,” she said.

Although she attended Denver, Kwan visited Boulder often. A lot of her time in Boulder was spent hiking. She remembered one particular fall day years ago, when she said she could almost see the leaves changing from yellow to red as she hiked.

“I got some stunning photos that day,” she said. “One of them was my screensaver for a long time.”

In addition to hiking and visiting Boulder, Kwan enjoyed snowboarding and loved living near the mountains.

As for her career as a figure skater, Kwan said that part of her life is in the past.

However, Kwan greatly enjoyed watching this summer’s Olympics and described what she perceived as a nice energy at the games. She remembered watching a particularly nerve-wracking race her friend, Allyson Felix, competed in. A Brazilian runner bumped into Felix during the race, causing her to drop the baton during the hand-off. Felix became the most decorated U.S. woman in Olympic track and field history during the games.

She enjoyed watching Michael Phelps, Simone Biles and Aly Raisman. But Kwan said watching the games is an entirely different experience since she knows what it’s like to compete in them.

“It was hard to watch my friends compete, knowing all the sacrifices they’ve made to get there,” she said.

Kwan returns to Brooklyn today, after spending only two days in Colorado.

“I would love to stay through Labor Day,” she said. “I know it’s a short visit but I’m happy to be back.”

She finished her stay in Colorado by hosting an Asian Americans and Pacific Islanders organizing event at DU Thursday night.