Biden visits CU-Boulder for ‘It’s On Us’ campaign 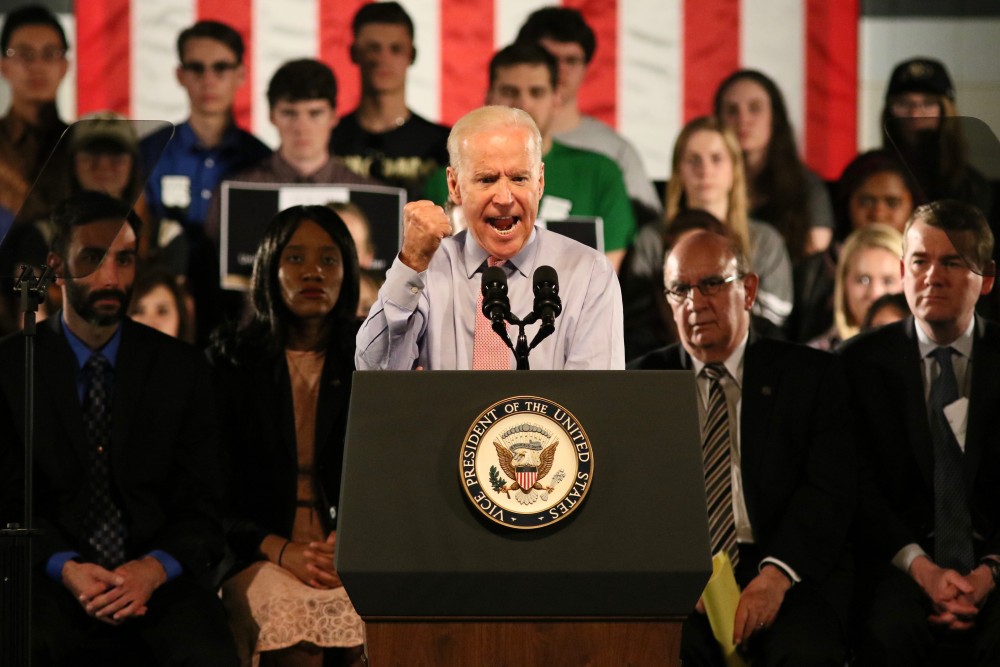 Friday afternoon, Vice President Joe Biden came to the University of Colorado-Boulder as part of the White House’s “It’s On Us” campaign to raise awareness about sexual assault. The stop at CU was his third school in one week, after talking to students at the University of Pittsburgh and the University of Nevada-Las Vegas.

The campaign, launched under the Obama administration in September of 2014, aims to bring awareness to the issue of sexual assault on college campuses. According to the initial White House press release, the initiative “asks everyone — men and women across America — to make a personal commitment to step off the sidelines and be part of the solution to campus sexual assault.”

At CU, “It’s On Us” videos are a common occurrence at football and basketball games, but the results of CU’s 2015 campus sexual misconduct survey have placed the issue more front-and-center than ever before. The survey results, released on Feb. 9, shows that out of the 13,009 participants, nearly 15 percent (1,990) reported that they had experienced some type of sexual assault during their time at the university. The aggregate results for undergraduate women were even more sobering, as 28 percent (1,545) of participants said they had been sexually assaulted in some way.

Many speakers came before the vice president, including Jessica Ladd-Webert, director of the office of victim assistance at CU, and Daymond John, CEO of FUBU and star of the TV show Shark Tank. Some of the event’s most moving remarks came from former University of California student Sofie Karasek, a survivor of sexual assault.

“Connecting through social media, survivors have used the gender equity law, Title IX, to file federal complaints and lawsuits against their institutions,” Karasek said. “But even with this increased awareness, too many schools are scrambling to plaster band aids across their deep wounds, hoping that that is going to heal them from epidemics of violence.”

The University of California is under Title IX investigations, along with over 150 other universities across the country. Currently, CU is still the subject of a Department of Education inquiry that has been ongoing for roughly the past three years. CU Chief Spokesperson Ryan Huff believes that this event, coupled with the school’s recent efforts, can combat sexual assault on and off campus.

“Certainly having a vice president here helps bring awareness to this topic,” Huff said. “For us, one is too many. So we need to keep working on our educational efforts, not only for sexual assault prevention but also being a bystander to bring that number down to far lower.”

It was eventually Biden’s turn to speak, and he did so with the candor and passion that has defined his time as an elected official. He touched on almost every topic that comes up when discussing sexual assault: the role that men play, how they can be allies, the stigma of sexual assault and the ever-pervasive concept of victim blaming.

But there are still obstacles to defeating what Biden called “rape culture” and creating a space in which women have a recognized right to say no, and men can be comfortable intervening in cases of sexual assault.

“Some of the most prestigious universities in America [are thinking], ‘It’ll get us bad publicity to announce how many women have been abused on our campus,'” he continued. “That’s as bad as a corporation not telling you that there is a toxin that was released from their factory. There is no moral difference, in my view.”

Marguerite Behringer, a junior at CU, believes that problems on the campus could be combated by addressing the problems earlier in students’ lives, rather than starting in college with an online course.

“Education earlier — people need to have these conversations in high schools, not as an orientation that you click through online,” Behringer said. “We need to actually be in person, hear the stories of people and understand what it means to rape someone or to feel sexually assaulted.”

As the vice president continues the campaign, CU is left with the results of their February survey and a verbal commitment from Chancellor Phillip DiStefano to keep working toward solving the problem of sexual assault on college campuses.

Addressing the men in the crowd, Biden issued a challenge to them to look in the mirror and ask, “Are you being the man you think you are?”

As he rounded out his speech, he touched on something that sticks out in the survey results: out of the 32,775 enrolled students, only 13,009 chose to respond.

“Think about how many voices are on this campus that you know, but you haven’t heard, crying silently.” 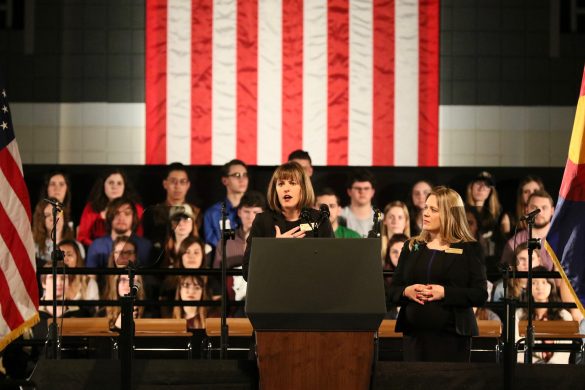 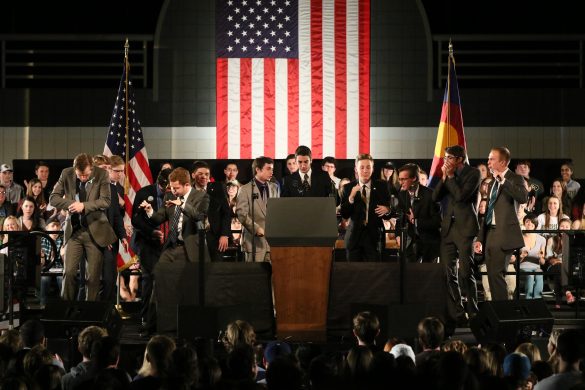 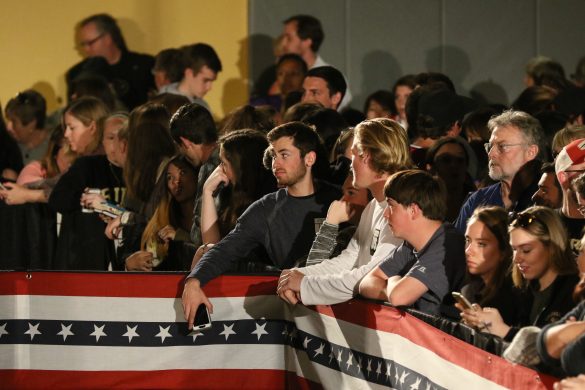 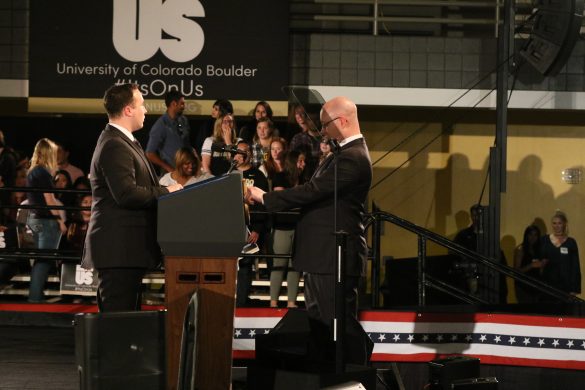 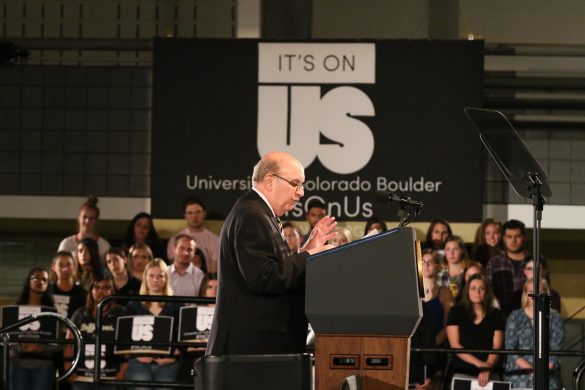 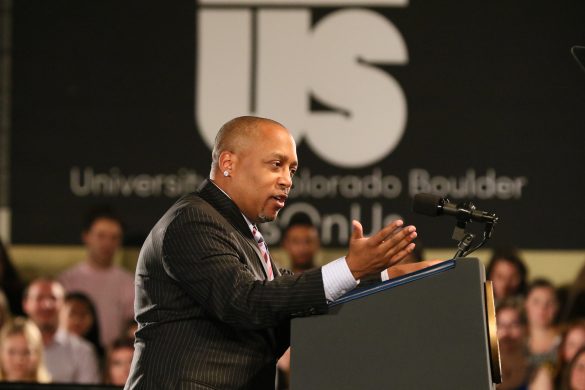 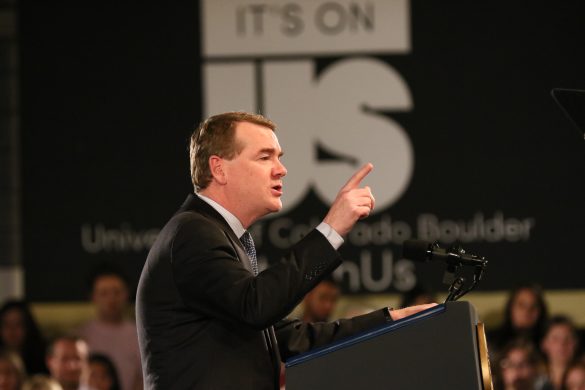 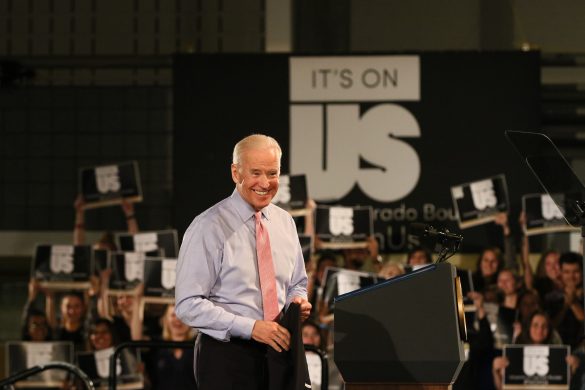 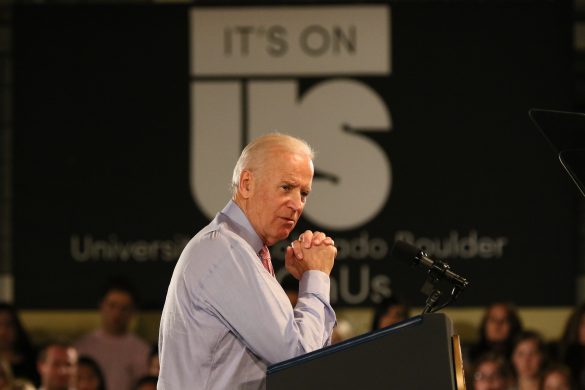 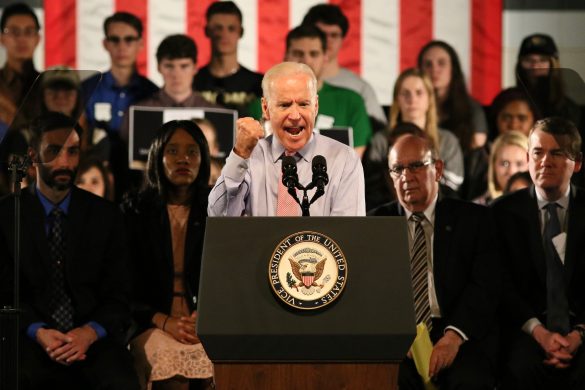 Vice President Joe Biden delivers remarks on ending sexual assault during the 'It's On Us' rally at the University of Colorado Rec Center. April 8, 2016 (Nigel Amstock/CU Independent) 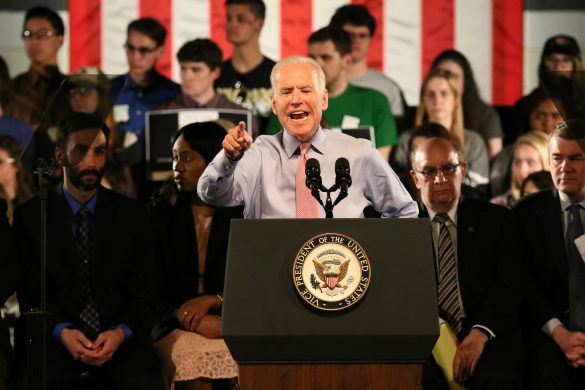 Vice President Joe Biden delivers remarks on preventing sexual assault during the 'It's On Us' rally at the University of Colorado Rec Center on April 8, 2016. (Nigel Amstock/CU Independent) 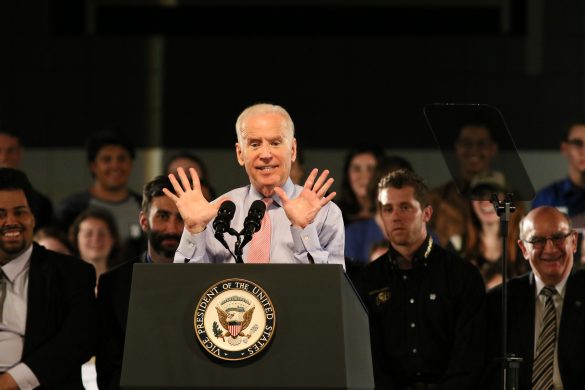 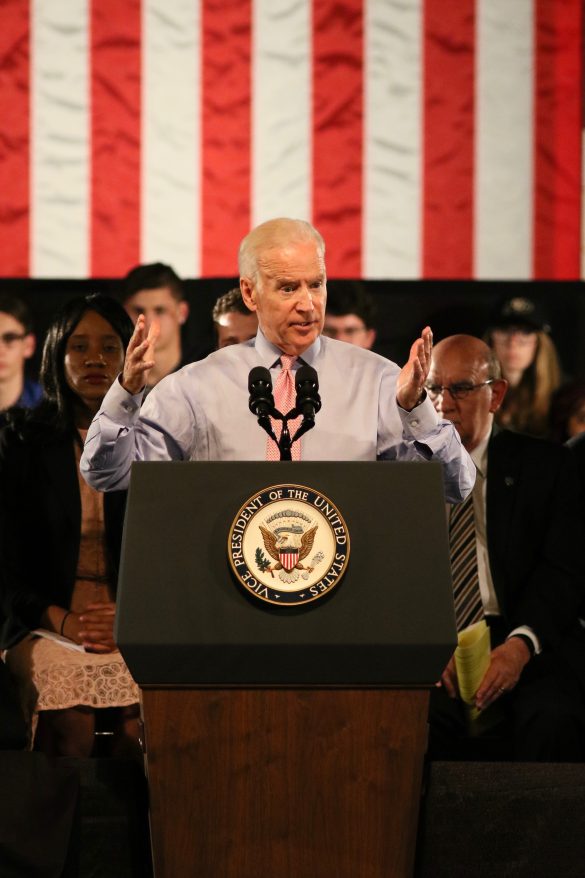 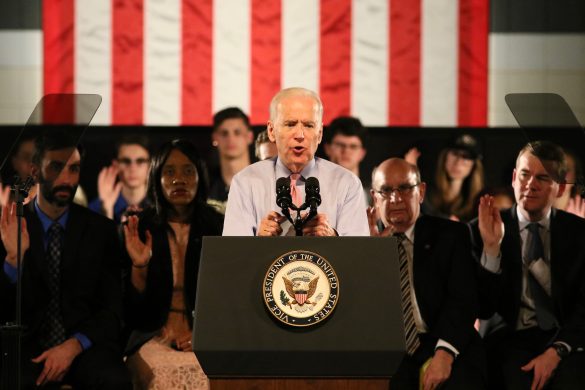 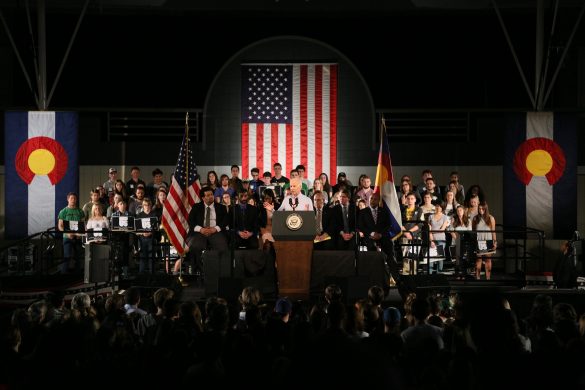 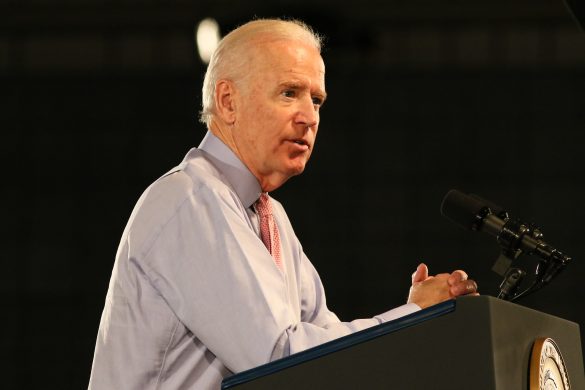 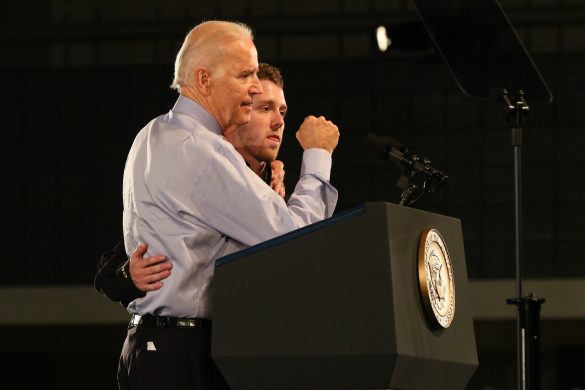 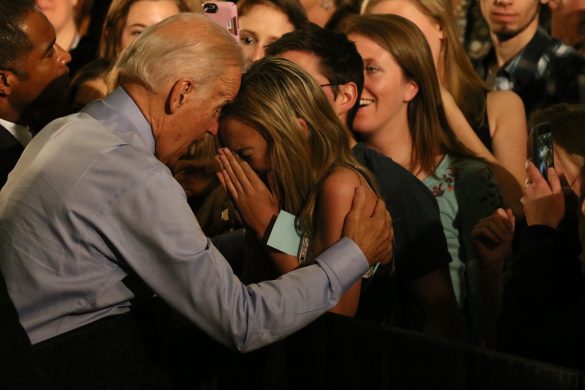 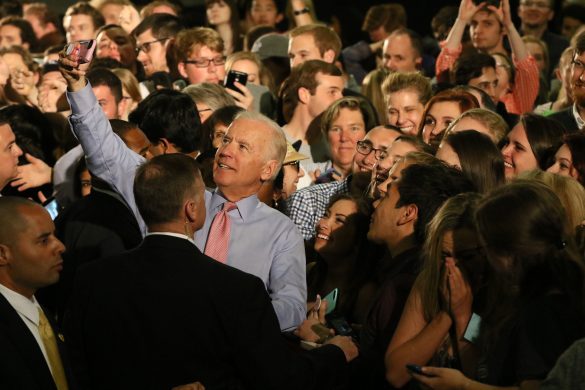 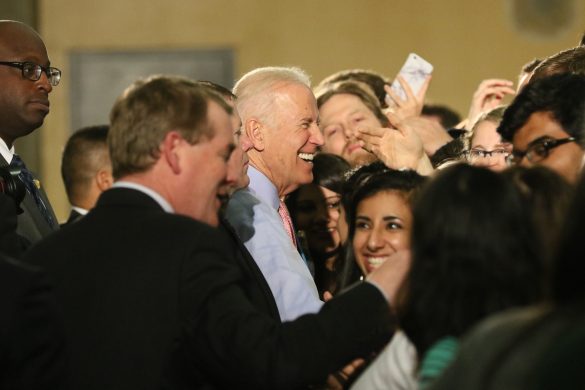 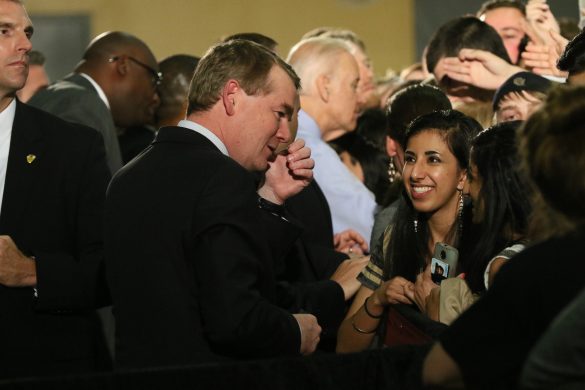 Andrew Haubner is the General Assignment Editor at the CU Independent. A senior from New York, he can be found on twitter @a_g_haubner.

CU Board of Regents names Mark Kennedy as presidential...