Buffs best Stanford, sink the Cardinal from beyond the arch

Coming off of a less-than-stellar road trip in Washington last week, the University of Colorado men’s basketball team needed a big win against Stanford at home on Wednesday night. After a 91-75 finish, they got it.

“Obviously a great team victory for the Buffs tonight — had a lot of really good individual performances, played really good as a team, hit three of our four numbers that we talk about all the time. The only thing we didn’t hit is our turnovers — we hit 15 rather 12,” head coach Tad Boyle said.

Junior guard Josh Fortune started off the scoring for the Buffaloes, making all three of his first attempts from behind the arc and logging nine points in the first three minutes. Little did he know he would set the pace for the rest of the game from that area of the floor.

By the end of the night, the Buffaloes completely uprooted the Trees from the three-point range, going 13-19 (68.4 percent) on the night. Fortune and sophomore guard George King contributed five apiece on that stat line.

“It just comes with the result of playing inside-out,” King said. “Josh Scott draws the double teams, so when he has the ball down low, kicks it out [it] makes our job — myself and Josh Fortune’s job — real easy to knock down shots because we’re wide-open, usually, when that happens.”

King led them all with 23 points, making eight of nine attempted field goals. He was followed by Fortune, who contributed 21 points to the Buffs’ cause, channeling the spirit of Allen Iverson by sporting some cornrows for the night. Senior forward Josh Scott and sophomore forward Tory Miller added to those numbers with 14 and 12 points, respectively.

“We had a few turnovers and stuff like that that we know we can do better at, but this was a good game for us and we’re just going to get better from here,” Fortune said.

The game got off to a quick start for the Buffaloes, who forced a shot clock violation on Stanford’s first possession, which was followed by three straight threes from Fortune alone. The Cardinal stayed close with the Buffs for about half of the first 20 minutes of play, but a three-minute scoring drought from Stanford and a run from Colorado put them up 25-11 midway through.

Even though the Cardinal managed to end the dry spell eventually, the light at the end of the tunnel got much dimmer for Stanford throughout the remainder of the half. With six and a half minutes on the clock leading into the break, the Buffs led by as much as 18 points, 33-15, before the Trees were able to fight their way back ever so slightly.

For the half, the Buffs shot lights out from the three-point range as they sunk eight of their 13 attempts (61.5 percent). King sunk 4-4, with Fortune going 3-5 and junior guard Tre’Shaun Fletcher adding one more. All over the floor, the Buffs shot 44.4 percent on 12-27 shooting as Fortune led the herd with 13 points and King added 12.

At the other end of the floor, the Cardinal only converted 29.4 percent of their shots from the field (10-34) and only made one of their 10 attempts from downtown. They only committed five turnovers to Colorado’s 10, but that didn’t seem to matter much in the long run.

Just six minutes into the second half, the Buffs extended that lead to 23, 62-39, but the Cardinal had a little more fight left in it. Midway through the half, Stanford ignited a 13-0 run to get back within 10, 64-54, with just under 10 minutes remaining.

But the cookie didn’t crumble the way Stanford hoped it would after that run. When time expired once and for all, the Buffs sealed a major victory at 91-75.

Going into Wednesday night, eight teams in the Pac-12 were competing for a first-place spot in the conference with two teams sitting at 5-2 and six sitting at 4-3. The Buffs, now 5-3 in Pac-12 play, are looking to top those teams after their win against Stanford and a hopeful win against California coming up.

“It’s a step in the right direction,” Boyle said. “We talked on Monday at practice about this being a week of separation, and this is a step in that separation. We have to continue that on Sunday, so we can’t get too high off this win.”

The Buffs return to their home court on Sunday, Jan. 31 at 3 p.m. to take on California in the hopes of redemption for their early January loss to the Golden Bears. The game will be broadcast on Fox Sports 1. 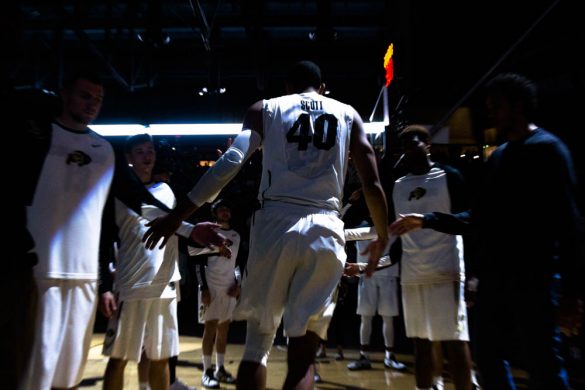 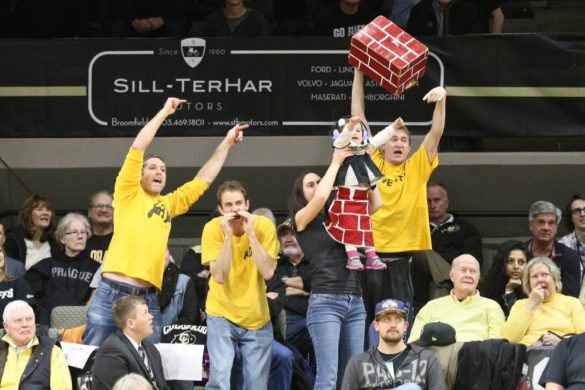 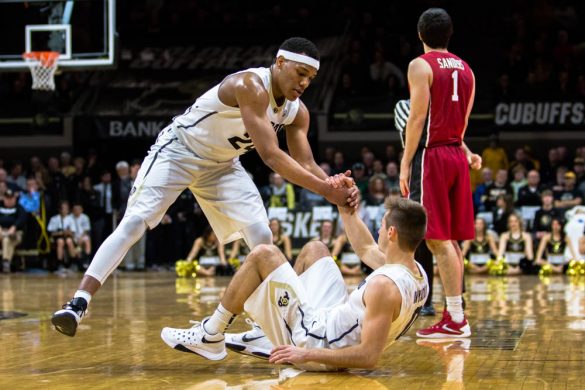 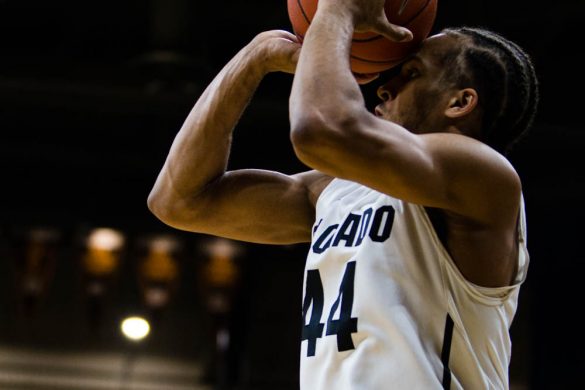 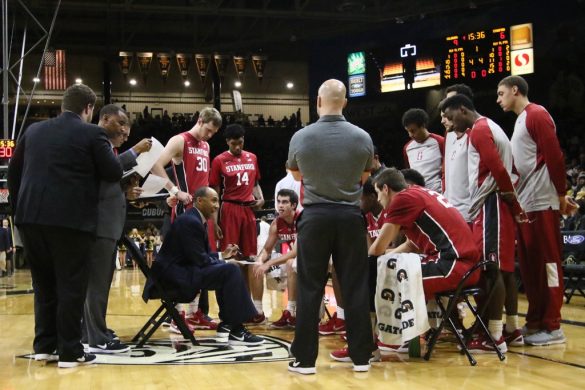 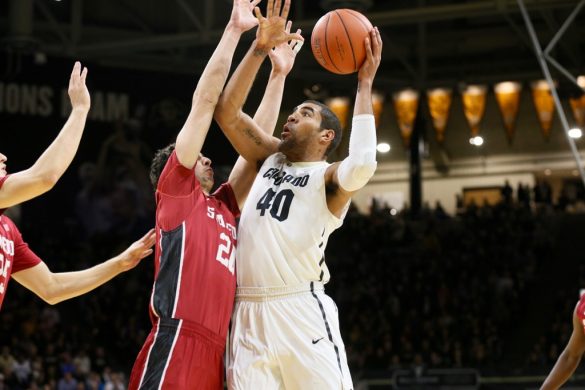 Senior forward Josh Scott looks to shoot the ball over a Stanford defender early in the first half of play at the Coors Event Center. Jan. 27, 2016 (Nigel Amstock/CU Independent File) 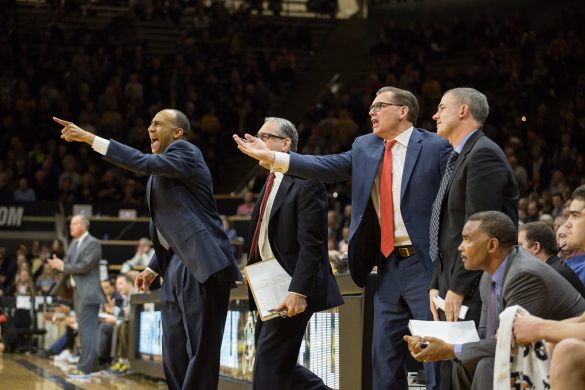 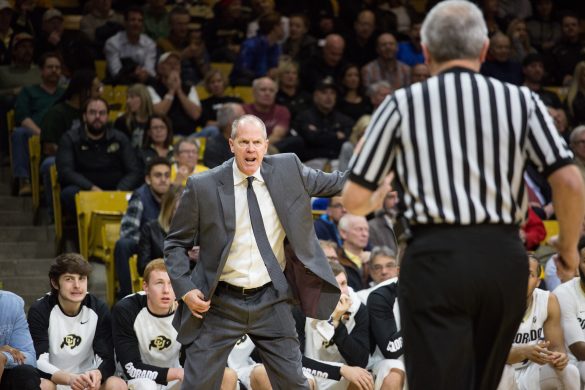 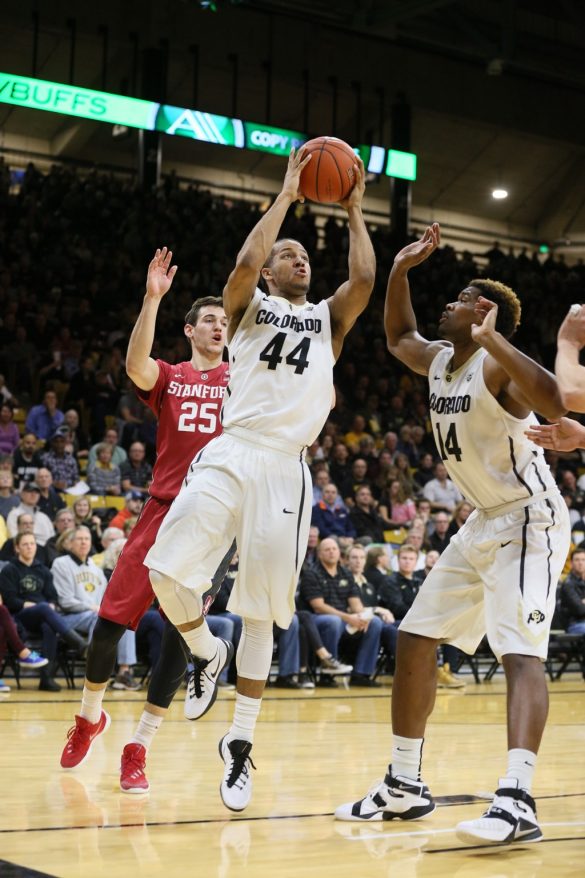 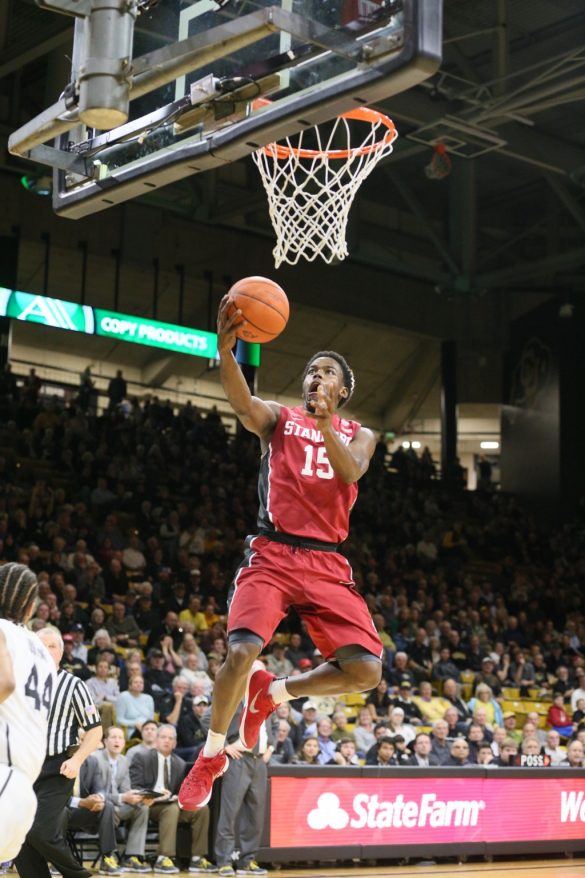 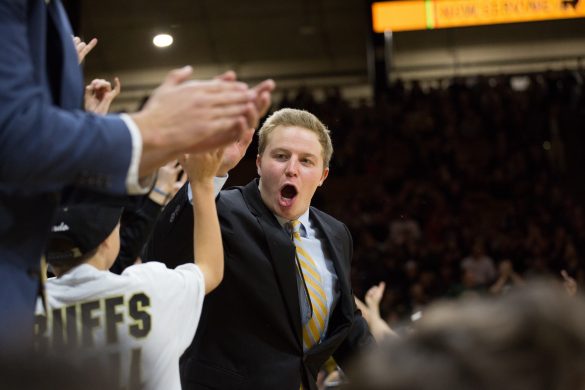 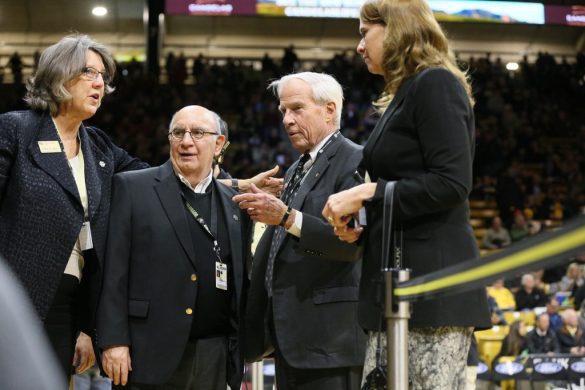 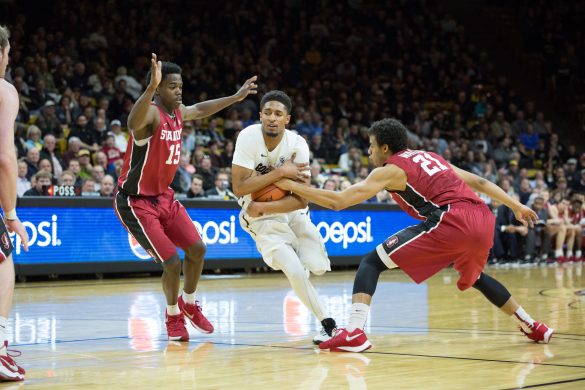 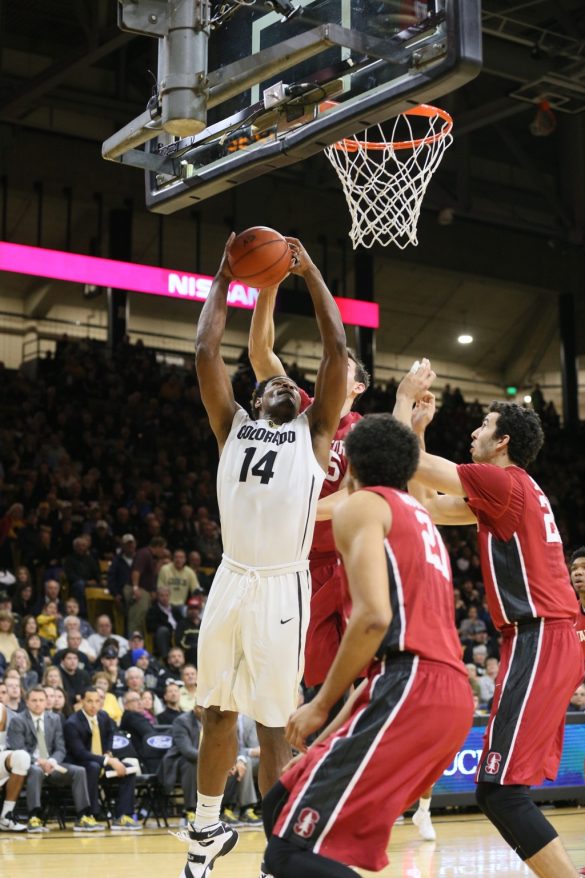 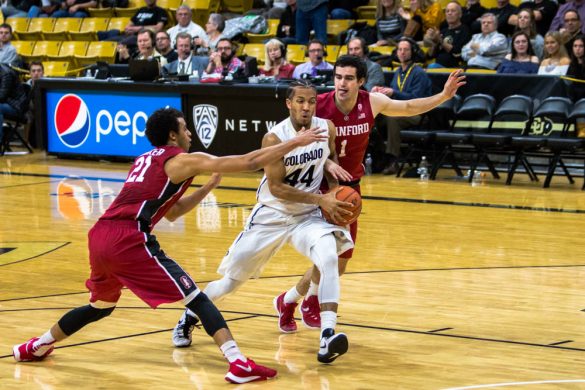 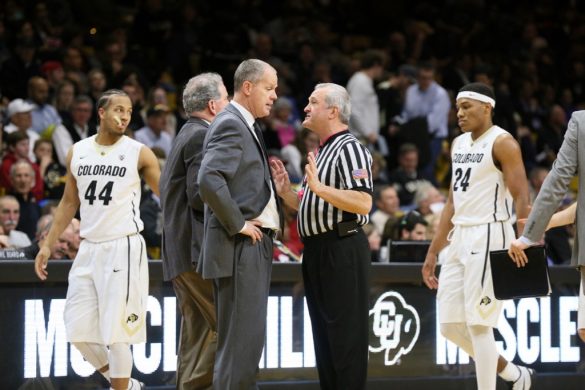 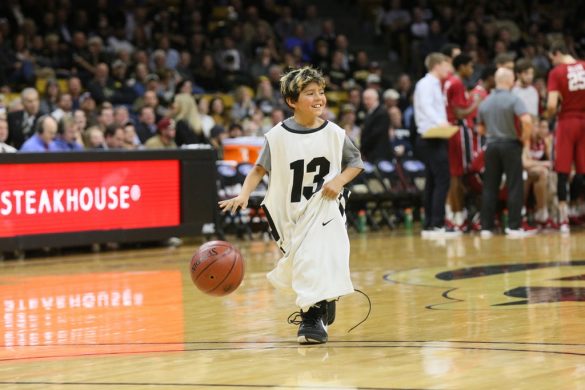 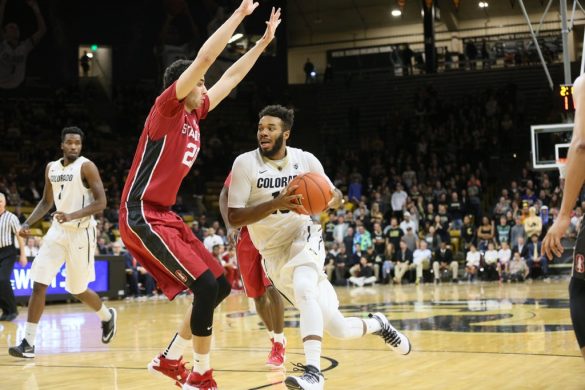 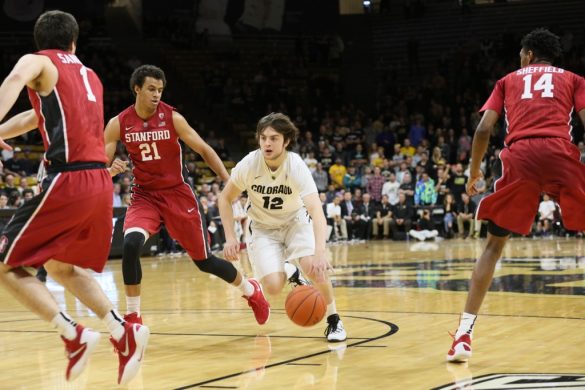 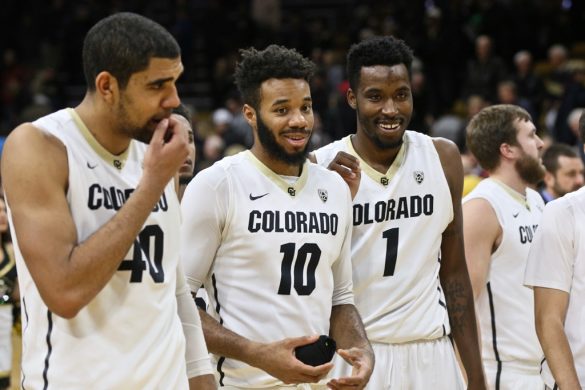