Music Preview: This week at the Boulder Theater 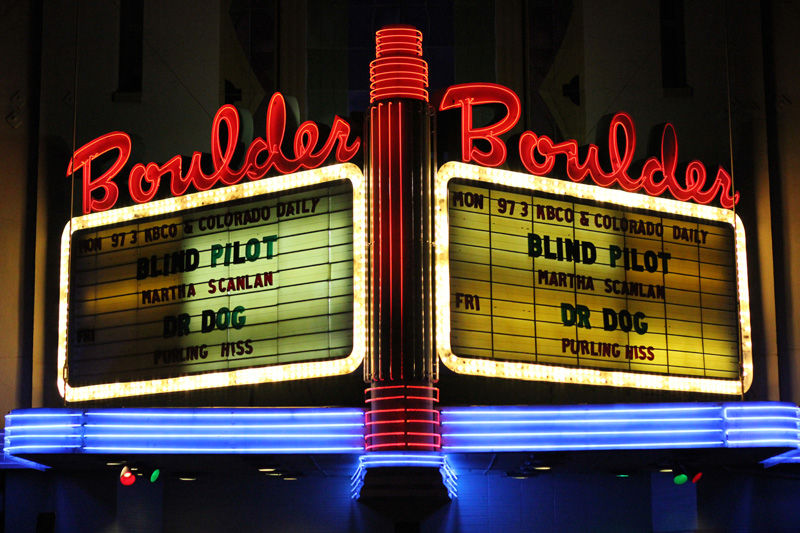 The sign at the Boulder Theater lights up the Blind Pilot concert on Jan. 30, 2012. (Kai Casey/CU Independent File)

On Friday, Oct. 9 at 9 p.m. The Word will perform their bluesy, gospel-infused music at the Boulder Theater. In 2001, The Word released their first self-titled album but then the supergroup parted ways, coming together intermittently to play shows at Bonnaroo and other high-profile events. During their 14-year hiatus of sorts, their members were working on other projects; The Word comprises musicians from funk and blues bands Medeski, Martin & Wood and the North Mississippi Allstars. In May 2015, the band released their second album Soul Food, which displays their noticeable maturation and genre-combining jams. Most of The Word’s songs are instrumental fusions of funk, blues, rock-n-roll and gospel, highlighted by the soulful sacred steel guitar. The supergroup’s undeniable individuality comes from its five members: keyboardist John Medeski, famed sacred steel guitarist Robert Randolph, guitarist Luther Dickinson, drummer Cody Dickinson — who occasionally plays the electric washboard — and bassist Christ Chew. The Word will also be displaying their talents at the Ogden Theatre on Saturday, Oct. 10, and both shows are sure to be a foot-stomping and hip-swaying good time.

Frank Turner and the Sleeping Souls

On Saturday, Oct. 10 at 8 p.m. Frank Turner and the Sleeping Souls, a British-based folk/punk band, will take the stage at the Theater. This group captures attention by combining two seemingly distinct genres of music: folk and punk. They synthesize these two styles by meshing folk-style melodies with instrumentals deriving from punk. Beginning in 2006, the band’s journey has come a long way but looks to be far from over. Turner and his sleeping souls will also be performing at the Ogden on Friday, Oct. 9.

Joan Armatrading, a British artist, will bring her multifaceted performance to the Theater on Monday, Oct. 12 at 7:30 p.m. As a singer, songwriter and guitarist, her music is saturated in authenticity and honesty. Armatrading’s strong vocals add a special something to her lyrics, touching listeners’ hearts in the process. Not only is Armatrading’s strong ability apparent in her work, but in the recognition of her work as well. She was nominated for a Grammy award three times, nominated for one Brit award, received an Ivor Novello award and was a part of VH1’s Top 100 Women of Rock poll. Although Armatrading began honing in on her musical abilities at the young age of 14, her career truly began in 1971 around age 20 after signing to Cube Records. After 44 years of producing beautiful, heartfelt music, Joan Armatrading is still going strong, but has declared this tour to be the last major one of her career. This tour hits venues all around the world including Holland, Germany, Finland and of course Boulder, Colorado.