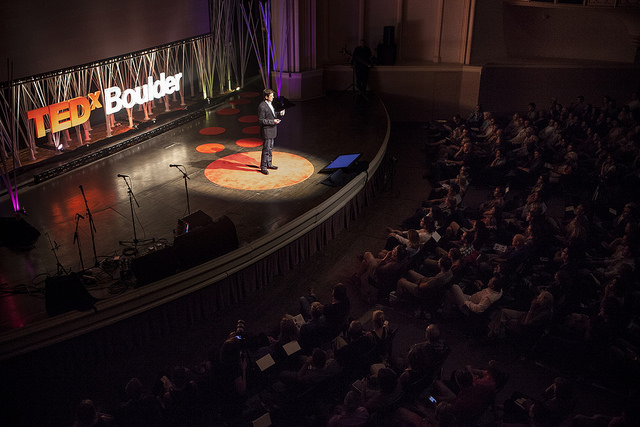 If you live in Boulder, odds are you’re familiar with Tedx, a community that organizes events to motivate and inspire people. Last Sunday’s TedxBoulder event in the University of Colorado’s Macky Auditorium marks its sixth consecutive year here in Boulder. While empathy and malice was this year’s official theme, the speakers and entertainers also focused on a strong sense of community.

The event kicked off with the “yoga-acrobatic” group Fractal Tribe who set the tone for empathy and malice by using their bodies to depict themes of competitiveness versus teamwork. “You’re never too young to play airplane,” they said, as they laid on each other’s feet and held each other up. Using this concept of the childhood game airplane, Fractal Tribe demonstrated that we are all people and being close, together and present are what make us human. Balancing on each other’s shoulders with ease opened up the show with the idea that empathy and malice live inside all of us, but that the balance of these emotions is what make us human.

With 12 speakers and two musical performances, the event’s talks ranged from topics like organic food to sex to the vaccination debate. The event was was noticeably geared toward a crowd of Boulderites.

“I thought it was just very Boulder. Everyone leaning on each other was a major key point,” said University of Colorado student  and Tedx atendee Conar Donoran.

Speaker Brian Coppom told the story of his long journey in finding his passion: local produce and farmer’s markets. Having cycled through many unfulfiling business ventures, Brian found his dream job as the executive director at Boulder County Farmers’ Market. Through a vivid analogy of life as a succulent tomato, Coppom shared his beliefs that people should all nourish their bodies with fresh foods. Anthropologist Scott Carney recounted his trip to India where he went on a quest to find ultimate consciousness and awareness. By describing his experience of watching a woman take her own life in vivid detail, he emphasized how important each life is and addressed the cliche that life is short.

Apart from the Tedx speakers, there were two musical performers. Christen Lien took a classical direction as she portrayed what she believed to be empathy and malice through the viola. Lien’s piece truly embodied this year’s theme by reflecting a person’s life journey and showing that all people embody both of these contradicting emotions. This theme was also portrayed by the second musical act, Trace Bundy, who played a few pieces by alternating between two guitars. One guitar was tuned in D minor and the other in D major, which represented the two distinct emotions in his song “Joy and Sorrow,” the performance of which resulted in a standing ovation from the crowd.

Not only did the speakers at this year’s TedxBoulder understand how to cater to the peculiar crowd that comes out of the Boulder woodwork, but they also made people recognize themselves as individuals within the Boulder community of compassion, kindness and acceptance. While Boulderites are open-minded, have empathy and show compassion, all have, at some point or another, experienced malice within themselves and those distinct emotions both make people who they are as individuals and as part of the community.