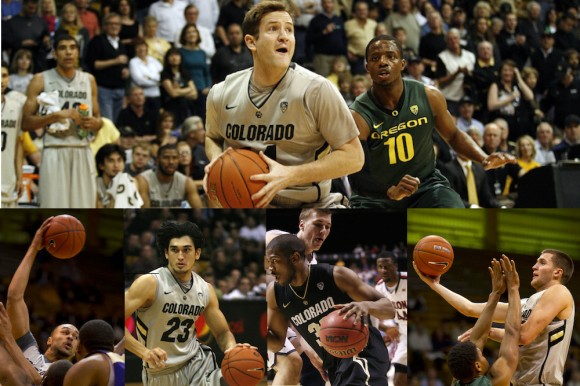 Over the summer, former Buffaloes basketball guard Beau Gamble will lead a slew of alumni ballers as they take on 96 other universities across the country. The grand prize is one million dollars.

And, using the wise words of Bill Walton, this is not a truck-stop tournament.

“It’s super, super high-level basketball as far as the talent level goes,” general manager Gamble said. “Championship game, semifinals, and then I think the quarterfinals are all televised on ESPN or ESPNU, so it’s a pretty big deal.”

The monetary incentive certainly helps with the team’s motivation to walk home with nothing less than a title.

“A big prize like that is definitely enticing and gives you a little more incentive to play,” team member Austin Dufault said. “The whole idea behind the tournament, I think, is really cool because it opens up to so many different people and so many different types of teams.”

In its inaugural year last year, The Basketball Tournament (TBT), though substantially smaller with 32 teams, saw unprecedented success. It gained the attention of basketball fans all over the country who starved for some off-season action as they witnessed the Notre Dame Fighting Irish alumni team walk away with a tournament title. The $500 G’s they left with wasn’t bad, either.

This year, the Buffaloes are looking to claim the grand prize of $1 million, and they have the all-star lineup to back them up.

“For me, it was a no brainer when I got asked if I could play in it,” Chen said. “I’m really pumped to be able to play with guys I played with. I’m also excited to play with former Buffs who I grew up watching, which will be really cool as well.”

Dufault shared the same sentiment as his former and future teammate.

“Richard Roby is the leading scorer, tied with Cory Higgins, all-time at CU,” Gamble said. “He’s playing in a league in Asia right now where he’s an all-star. He’s had a tremendous career overseas and has played in the D-League. A lot of people have said that he’s more than NBA-talented.”

Don’t get your hopes up too high, though. Ace alumni Spencer Dinwiddie won’t be allowed to play in the tournament due to his NBA contract restrictions.

“From my understanding, current NBA guys that are in contracts are likely not able to play,” Gamble explained. “But free agents and players who are going to be free agents in between this season and next season, as far as NBA guys go, are going to play.”

As of yet, the team does not have a coach.

“So far, we don’t have an exact coach, but we have a number of people that are candidates to coach,” Gamble said. “Dwight Thorne, who’s a former player, is maybe willing to coach. He’s an AAU coach down in Dallas. Eric Kapel, former manager, coached high school basketball in Florida.”

They’ll be playing the west region for the first round, which starts July 10 through the 12. If they win out of there, all expenses are paid for—flights and hotels—on their road to Chicago. The second round will be played July 17-19.

Should they win in the second round, the Buffalo boys will stay in Chicago for round three. After that, it’s off to New York for the final four and then the championship, which will take place on August 1st and 2nd.

As of right now, seeding hasn’t exactly been set up yet. As the tournament is individually run by Dan Friel and Jesse Leads, the selection process won’t follow the traditional means for seeding. Instead, the teams with the most votes will receive a higher bid than those who receive less votes.

You can vote for the alumni Buffs here.