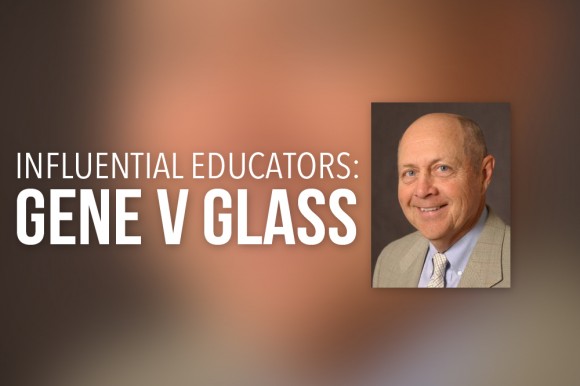 Research Professor at both the University of Colorado and the National Education Policy Center, and a retired Regents’ Professor at Arizona State University, Gene Glass splits his time between Arizona and Colorado.

“Even though I’m retired basically, I still put in a good bit of time in both places,” said Glass. “In this day and age, location doesn’t mean much. You’re pretty much in touch with everybody all the time.”

On the subject of his newly released ranking, Glass said, “those rankings come out of the American Enterprise Institute, and they’ve put out these rankings for four, five, six years. The AEI is a pretty conservative think-tank.”

Glass continued by saying that “in the first few rounds of these rankings – I don’t consider myself conservative, nor do a lot of the people I work with – we were ranked pretty low in this ranking system, and we looked at the kind of information they put together to form these rankings and we saw that the more progressive researchers and scholars were way behind the conservative scholars in the use of social media.”

“In the last few years many of us talked about it and said that to be influential we were going to have to be more present on social media, and I think that has resulted in how the higher levels of the rankings have been taken over by more progressive scholars, more liberal scholars,” Glass finished.

“Among academics, things like Facebook and Twitter are used to guide people towards blogs and websites,” Glass said. “They have become a very effective tool in getting our messages and the work of the more progressive scholars visible.”

Glass grew up in Nebraska and achieved his doctorate in Wisconsin. He taught at the University of Illinois and at CU Boulder from 1966 to 1986.

“I was essentially a German major at the University of Nebraska,” said Glass. “I was heading towards a job teaching high school German, when I ran into a professor of psychology. A professor who needed a computer programmer on a project and he eventually took me under his wing and drove me across the country to find a graduate school.”

“He, himself is a very, very influential education professor at the University of Illinois,” said Glass. “That was just a lucky break on my part.”

“I’ve always had a soft spot in my heart for CU,” said Glass. “I loved the college and found it so supportive.”

“One reason was because I was always changing interests. Each time I changed my field, the college was supportive,” said Glass.

“There are plenty of universities where they don’t allow you to range that widely across different fields, that would be seen as somehow getting off track, or getting off target and would be punished in some ways,” said Glass. “CU was always so open to that sort of experimentation.”

Working mostly on educational policy now Glass said, “one of the things [I have] come to understand, and just in the last few years, is how some of the most important work that is going on and is influential in the area of educational policy is done by journalists.”

“Things are just moving too fast, information is moving too fast, communications are world wide and instantaneous and the ideas and the reporting that is coming from people who work in the style of journalism,” Glass said. “That’s what has really amazed me.”

Studying the privatization movement in K-12 public education, Glass finds it “very troubling that there are too many corporations who’ve awaken to the fact that public education in America is a half a trillion dollar business and they’re trying to get their hands on a lot of that money.”

Another policy area that is concerning to Glass is high-stakes testing and accountability testing.

“I think that a lot of havoc has been wreaked in that sector,” said Glass. “There are some big cooperation’s who are buying off politicians, making billions of dollars from the high-stakes testing business.”

Glass continued by saying “It is, almost without exception, working against the interests of students and education in general.”

Gene Glass spends most of his summers and fall seasons in Colorado, teaching and aiding both the NEPC and the University of Colorado at Boulder.