As students walk to their classes, they’re headed to various buildings on campus with their own histories and personalities. While Old Main, the University of Colorado’s original building, is the most famous and recognizable, a handful of other places have interesting stories to tell. 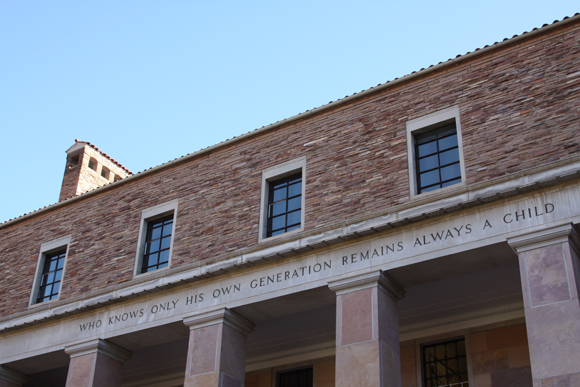 The library was named after one of CU’s presidents, George Norlin, considered to be one of the most beloved presidents in the school’s history. In the 1930s, Norlin watched the university’s population increase to 4,500 students and oversaw the construction of many new buildings, making the campus look much like it does today.

Norlin was once approached by the governor of Colorado, a Ku Klux Klan member, and was offered legislative support in return for the firing of Catholic and Jewish staff. Norlin refused, having spent time in Germany lecturing on American Civilization at Berlin University in 1933, which strengthened his advocacy for warning people against the dangers of Nazism and anti-Semitism.

“We can, perhaps, afford to play politics with many things, but not with education,” Norlin said in response to the governor’s proposition.

The new library that was designed and completed in 1940 was named for Norlin in 1944, two years after his death. Students can still find his inscription, “Who Knows Only His Own Generation Remains Always A Child,” engraved above the west entrance. Folsom Field was named after Frederick Folsom, who was appointed as CU’s head football coach in 1895. In addition to leading the football team to nine conference championship wins, Folsom earned his law degree from the CU in 1898 and taught at the law school from 1905 to 1943. He also practiced law in Denver and Boulder.

Folsom remains one of the top coaches in CU’s history, having maintained a 76.5 percent winning record.

Folsom Field used to be called Colorado Stadium but was then officially named after Folsom by the Board of Regents in 1944, following his death. Folsom Street also used to be called 24th Street, but was changed to honor Folsom. “Macky has the most interesting history,” said Allyson Smith, director of the CU Heritage Center.

The auditorium was named after donator Andrew J. Macky, a gold rush settler. According to Smith, Macky had an adoptive daughter, May, who became upset after she found out that Macky donated over $300,000 to the school, leaving nothing for May in his will. May filed a lawsuit against the estate asking for a third interest following Macky’s death, which held up the production of the auditorium.

“[The building] stood there with just walls but no doors or windows for years,” Smith said.

Macky Auditorium was eventually completed in 1922.

Macky has been the site of many notable musical performances: Yo Yo Ma, Herbie Hancock, Harry Belafonte and Neil Young. It has also featured talks by the Dalai Lama, Dr. Jane Goodall and Archbishop Desmond Tutu. The Fieldhouse currently houses an indoor track, but was previously used to host basketball games.  The building got its name from Roland E. “Doc” Balch in 1976. Balch coached the swim team from 1949-61 and later became CU’s athletic trainer.

The Balch Fieldhouse was also “the home of some 600 Navy trainees during the years of 1943 and 1944,” according to Bud Davis’ historical book on CU, “Glory Colorado!“ Home to many CU freshmen, Sewall Hall was named after Joseph A. Sewall, CU’s first president, in 1935. Sewall began as a professor of chemistry at the Illinois Normal University before moving to Colorado to begin classes Sept. 5, 1877 in Old Main. When classes first began there were only 44 students and one instructor other than Sewall. He watched as six students graduated at the first commencement ceremony.

Originally built as a women’s dormitory, Sewall Hall was the first residence hall on the Boulder campus. Before that, residents lived in Old Main or cottages on campus. It was first designed to fit 75 women on each wing.

During the last years of his presidency, the student population dropped and Sewall said his time at CU was “filled with sadness, disappointment and sorrow.”