Blog: Journalism at CU — an oversimplified explanation in four steps

This spring, the Regents are expected to vote on the new College of Media, Communication and Information. The new college should provide an amazing space for the next wave of media producers and analysts, but it’s been a long time coming. Nearly four years ago, the Regents voted to close the School of Journalism and Mass Communication and I, as a journalism student, have been getting questions about it ever since.

Fortunately, I’ve gotten pretty good at explaining the complex changes that are going on and have oversimplified them into these four steps.

In my first week at CU as a journalism major I got an ominous email. It spoke of “program discontinuance,” and things didn’t sound so good to me.

You can read the whole thing here (click to enlarge): 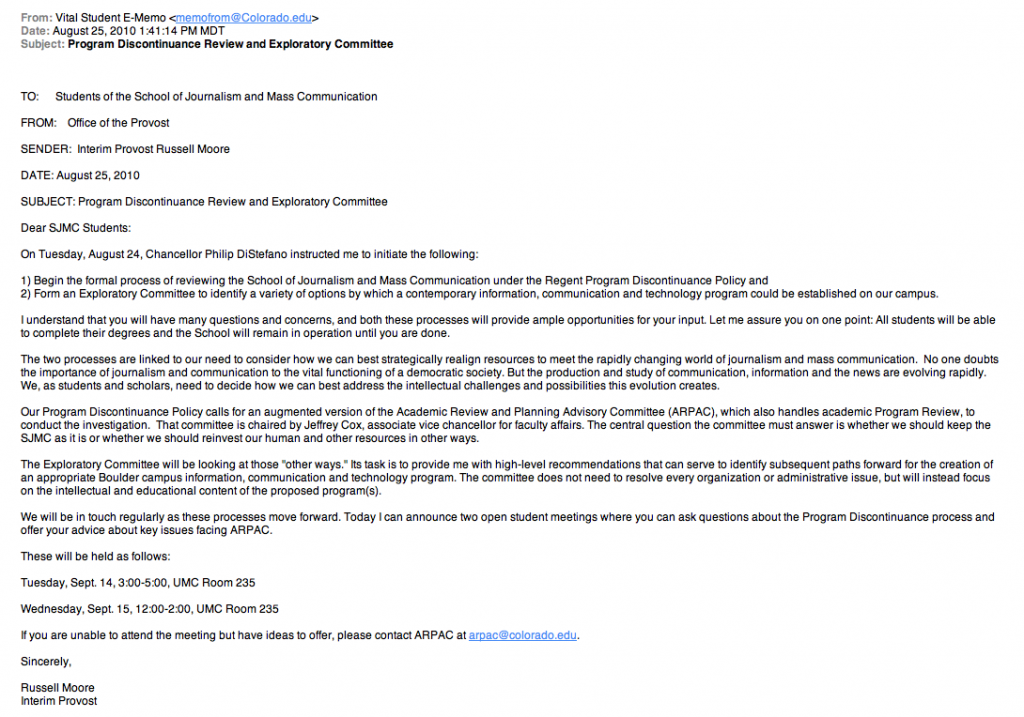 Near the end of my freshman year the Board of Regents voted to discontinue (not close, although that is a common misconception) the school based on the recommendation of CU administration.

When this happened there was a minor media freak out and the word “closure” was thrown around a lot. It was as if the school and all of the instructors and all of the students would just disappear. See 9News video below.

But that’s not the case; journalism at CU has stuck around and will continue to be around for the foreseeable future.

Journalism and Mass Communication, the program structure that came after the school, has something called Journalism Plus. Journalism Plus is essentially the same education that the school provided but also requires an additional field of study.

In other words, you couldn’t just major in journalism like you could have before. Now you have to double major with something else. Below is a video CU put together to explain the program.

4. There may be ICJMT or CMCI or something, hopefully

Those in charge have insisted that something greater will come out of the discontinuance of the school. Over the past four years, there have been many names for this entity. In fact, there have been too many acronyms for me to remember, although ICJMT was always my favorite.

It seems they have landed on the College of Media, Communication and Information, which, I should note, has not yet been approved. The new college would have eight departments and programs:

This combines past programs like communication and journalism along with new programs in information sciences and intermedia arts in hopes of creating a place for “cross-disciplinary cooperation at all levels of curriculum, research and creative work,” according the the college draft proposal.

Assuming the Regents approve the new college as soon as possible, the first freshman class would be in fall 2015.

CMCI has also set up a feedback page if you’re an enraged alum or a high school senior full of questions.

Rob Denton is the former Editor-in-chief of CUIndependent.com. Contact him at robert.denton@colorado.edu.

Rob is a senior news-editorial major at the University of Colorado - Boulder in the School of Journalism and Mass Communication and is a managing editor for the CU Independent. He has previously worked with Rich Clarkson & Associates, a multimedia firm in Denver, The Greeley Tribune, PBS NewsHour's InaugBlog and the Scripps Howard Foundation Wire. While not taking photos for the CUI, Rob enjoys taking photos of just about everything else, being joyful and watching The Dark Knight. Follow him on Twitter at @robertrdenton.

Staff blog: What I learned about journalism at SXSW...

Staff blog: Can’t decide on which class to take?...