Blog: A week with Google Glass

Rob Denton is the former Editor-in-Chief of CUIndependent.com and a senior journalism student. Contact him at robert.denton@colorado.edu or on Twitter, @robertrdenton.

I had the opportunity to play with CU Journalism and Mass Communication’s Google Glass last week. My initial reaction, like that of other techies out there, was that Glass is freaking sweet. But I’ve decided that while wearable tech is the future, Glass won’t be the device to take the mainstream leap. 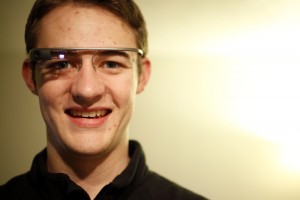 The first day I had Glass was the Friday before school started. With the new contraption perched above my brow, I took a walk from the journalism building to ATLAS. One person after another gave me awkward, confused stares. One confused student even approached me and inquired about the device; she had never heard of Glass.

This is the first reason I don’t think Glass will take off. Techies often think that this platform will revolutionize the way we interact with information, but that requires wide-spread adoption and a consumer base willing to wear the silly headset in public. That’s a long way off.

Steven Johnson, the author of “Where Good Ideas Come From,” says that it takes about 10 years to develop a tech idea and another 10 years for that idea to reach mainstream adoption. By that logic, Glass, which was first introduced in 2012, won’t reach the mainstream until 2022, eight years from now. That’s a long time. Eight years ago, the iPhone had yet to launch. Even if Google Glass is released for consumer use later this year, I don’t think the world is ready for it.

Wired has a great article related to this (and all things wearable tech).

So then I started thinking of the ways that Glass could help me as a journalist…and frankly, it can’t.

It is much easier to take a video clip on my smart phone and Tweet than it would be share something similar with Glass. Hell, Glass doesn’t even have an Internet browser at present. Glass is not much more than a smartphone on your face, but with less functionality than your actual smartphone.

Caveat: In a month or a year or five, that may be very different. Glass may be easier and less noticeable to manipulate than a brick smartphone, and I look forward to re-evaluating my position then.

For now, Glass is not a content production device.

And with an analogy to smartphones already created, here comes another: smartphones changed how people consume news. Today, nearly half (or more) of online news consumption comes from mobile.

Wearable tech will do the same. Today, organizations like the Washington Post are going not just digital-first, but mobile-first. In five years or sooner, news organizations will have to be wearable tech-first. “Glass-first,” if you will.

– Glass is too awkward and early to go mainstream in the near future, but wearable technologies will be the next big thing.
– Glass is not currently a good tool to produce journalism. Smartphones are much more practical and efficient.
– News producers need to start considering wearable tech as a medium they need to develop for. Just like print is different than TV, developing stories for mobile, browser and wearable will be different.

Rob is a senior news-editorial major at the University of Colorado - Boulder in the School of Journalism and Mass Communication and is a managing editor for the CU Independent. He has previously worked with Rich Clarkson & Associates, a multimedia firm in Denver, The Greeley Tribune, PBS NewsHour's InaugBlog and the Scripps Howard Foundation Wire. While not taking photos for the CUI, Rob enjoys taking photos of just about everything else, being joyful and watching The Dark Knight. Follow him on Twitter at @robertrdenton.