‘The arts hold us together’: The Boulder Philharmonic supports community in battle against COVID-19 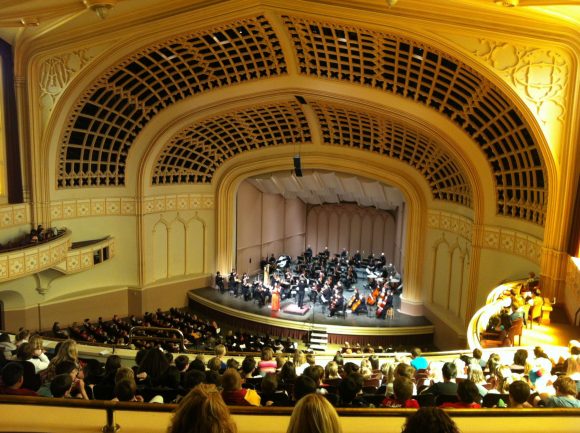 With social distancing and stay-at-home orders as a result of the COVID-19 pandemic, professional classical musicians cannot work. Orchestras across the nation, experiencing large financial losses, have been forced to furlough their musicians.

“Front range musicians are seeing suddenly, without warning, a drop of 90% or more in their pay. It has disappeared,” said Katie Lehman, the executive director of the Boulder Philharmonic.

The Boulder Philharmonic likewise cannot pay their musicians and has lost more than $100,000 from two canceled performances. The orchestra, which performs regularly at the University of Colorado Boulder’s Macky Auditorium, has seen a cut in all sources of revenue. With the loss of ticket sales and donors tightening their purse strings, the orchestra is struggling. As a smaller non-profit, it doesn’t have a large endowment to buffer the losses. For now, its 70 freelance musicians have joined the ranks of America’s unemployed workers.

However, the Boulder Philharmonics’ board of directors is working hard to support their musicians. The board created the Boulder Phil Musicians Relief Fund, which has raised $16,751 as of April 2, thanks to donations from the board of directors and other supporters. The money will pay musicians for two missed rehearsals from their canceled March 21 show “The Firebird and Frequent Flyers Aerial Dance.”

“The money is a fraction of what they should be getting, but (it’s) certainly a big help,” Lehman said.

“Music is absolutely essential to a society.”

When the orchestra secures governmental loans, Lehman hopes they will become more financially secure and able to support their musicians. Despite the hardships musicians are facing, she believes they can still support the Boulder community through the power of music, expressing the pain and loss we are experiencing as a global community.

“Music is absolutely essential to a society,” Lehman said. “The arts hold us together. When we have faced the deepest crisis in human history, there has always been music to get us through. Musicians have always been the voices of the underserved in our society. You don’t see a lot of music being written about corporate leaders. You see a whole lot of music being written about people who have been deprived or have been suffering through a disaster.”

As the quarantine stretches on, Lehman hopes the Boulder Philharmonic can continue to engage with the Boulder community.

For Boulder Arts Week, the Boulder Philharmonic will screen archival footage, curated by music director Michael Butterman, on Friday, April 3. The footage is from their 2017 performance at Washington D.C.’s John F. Kennedy Center for the Performing Arts for the SHIFT festival. This is the orchestra’s last scheduled event in lieu of canceled performances, but Lehman knows they will make a comeback.

“We are hoping to be a part of any reopening celebration,”  Lehman said. “We want to be there. We don’t know when that is going to be, so we are poised to work with the city and spring into action quickly when the opportunity arises.”