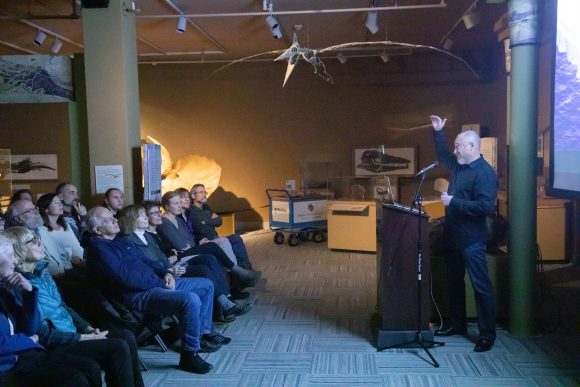 In 2004, Weller decided to give the protection of the Ross Sea his all. This launched an obsession, constantly pacing his backyard with his phone thinking about who he should call next. Feb 26, 2020 (Hunter Allen / CU Independent)

Photographer John Weller captivated audience members at the University of Colorado Boulder Wednesday night, with tales and photographs from his experience documenting the Antarctic’s Ross Sea, one of the last seas largely unscathed by human activity. Weller also explained how he came to spearhead its protection with the outreach program, The Last Ocean, helping to create the world’s largest Marine Protected Area.

The event was held in CU Boulder’s Museum of Natural History’s Paleontology Hall, where his collection called “Ross Sea: The Last Ocean” has been on exhibit for the past several months.

Weller has been a photographer for the last 20 years and is based out of Boulder. He graduated from Stanford University with a degree in economics, but promptly shifted his focus to pursue his passion for media — garnering critical acclaim for his skills in nature photography and film making.

Weller began his journey documenting nature with his book on Colorado’s Great Sand Dunes, highlighting the threat that it faced from developers as well as the people who rallied to protect it, recalling that “watching that process, it was an epiphany for me that conservation was a human good.”

His stories were complemented by a series of mesmerizing photographs, capturing the vastness and complexity of the Antarctic.

“I want to commend you not just on your artistry, your conservation, and your fortitude – but also on your storytelling,” said audience member Elizabeth Winter-Plumb, who said, “the arc that he chose to tell was a sequitous arc and it was incredibly effective.”

“I wish I could give you the power of this place as you’re coursing down over these vast silver black mountains of water,” Weller said as he explained his pictures and was met with audible “oohs” and “ahs” from the audience.

Painting a picture for the audience, he described approaching Antarctica after five days of journeying through the rocky ocean.

“There’s a thin white line across the entire Southern horizon,” Weller said. “When you get to that point you’re leaving those towering waves behind and you’re about to enter the ice. When the ship cuts through that line and into the ice, you’re just presented with this jigsaw puzzle.” 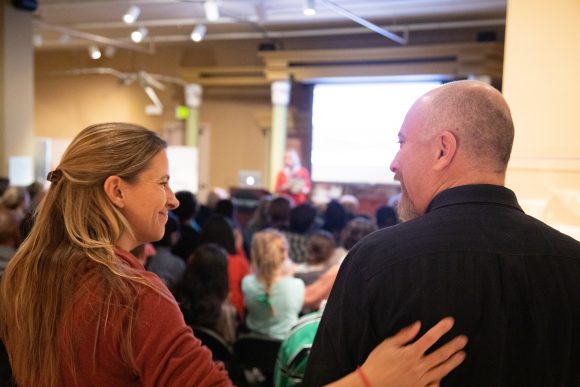 Cassandra Brooks, the wife of John Weller, places a hand on Weller’s back that says, “I’m proud of you, you’re gonna kill it.” Feb 26, 2020 (Hunter Allen / CU Independent)

Weller brought example after example of the majestic life of this cold and desolate sheet of ice. He described penguins in his photos as “leaving these bridal veils of bubbles” and snow petrels, which “look like little pieces of origami.” He described diving deep into the ice, a “resonant crystalline place … you’re stepping into a concert” he said referencing the voices coming from the creatures living there.

Jason Marks, a CU Boulder student, reflected on the presentation, explaining that it was “super enlightening .”

“(It) opened my eyes to a whole different part of the world I didn’t know,” he said.

Weller said the Ross Sea is the “site of the world’s largest and most productive ecosystem,” as measured in biomass, most of which comes from the abundance of krill, small aquatic crustaceans.

“The Ross Sea is the last large intact marine ecosystem left on Earth,” Weller said, describing a paper by Ross Sea ecologist, David Ainley. Although the paper also described that the Sea was being threatened by a Southern fishery.

“This is where I needed to make a stand,” said Weller, moved by the impact that changes in the ice have had on Adélie penguin populations.

While working with David Ainley he helped build a Marine Protected Area in the Ross Sea with the help of the Convention for the Conservation of Antarctic Marine Living Resources (CCAMLR). In 2010, the United States decided to take on this project and helped to bring the issue to the CCAMLR floor.

“I wanted to create this flood of media that went across the world and engaged the entire globe,” said Weller which helped lead him and his wife to their creation of the Last Ocean Project.

In 2016, after 12 years of negotiation and with the help of then-Secretary of State John Kerry, Russia, the last country to hold out on the initiative, signed on to the Last Ocean Project.