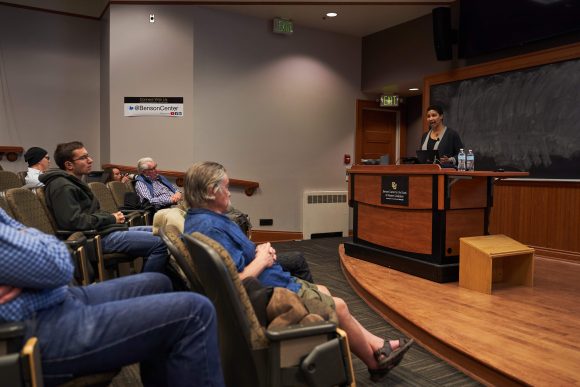 Danielle Allen advocates for reviving civics education and getting back to a place where people believe in and participate in democracy. Feb. 18, 2020. (Jackson Fox-Bland/CU Independent)

Danielle Allen, a visiting professor from Harvard University, spoke on the University of Colorado Boulder campus Tuesday as part of the Benson Center’s Visiting Scholar in Conservative Thought and Policy Series. Her presentation, titled, “A Supermajority for Democracy: How to Rebuild a Society of Free and Equal Citizens,” largely touched on constitutional democracy and the issue of civic education in the United States — or the lack thereof.

“Colorado is the right place to talk about the future of American character and of American constitutional democracy,” Allen said.

Colorado is the state of the continental divide — a trail that remains largely unfinished. Allen likens this to being a metaphor for where we find ourselves today as a country, fundamentally divided with no map of how to hike our way out. Her talk, she hoped, would serve as an attempt at plotting this map.

With these differences, Allen maintains that we must come to a shared understanding of what matters, by “linking our personal values with our shared values.” The ladder she explains as “the values of democracy- freedom, equality, liberty of justice for all, rule of law, constitutionalism, union, fairness, opportunity, truth and reconciliation.” 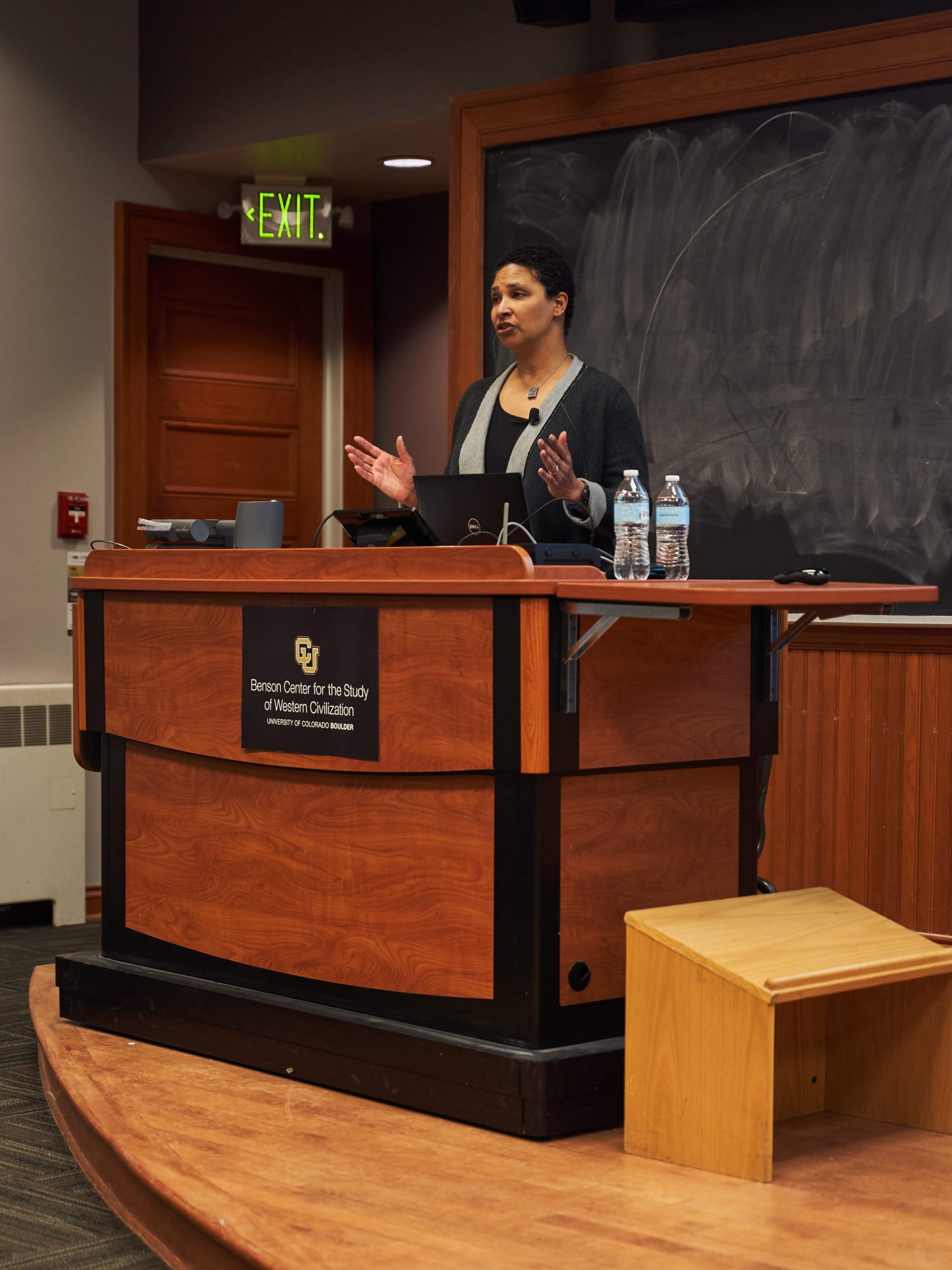 Danielle Allen,James Bryant Conant University professor and director of the Edmond J. Safra Center for Ethics at Harvard University, is a political theorist who has published in democratic theory, political sociology, and the history of political thought. Feb. 18, 2020. (Jackson Fox-Bland/CU Independent)

“To answer that, we have to remember what governments of this kind are supposed to do and be,” she said. “Their founding proposition is about freedom, equality and human wellbeing. The basic idea is that humans are purposive and that we seek to chart (a) course for our own lives.”

Allen cited the Declaration of Independence, describing that it too spoke of human purposiveness when it declared the pursuit of happiness. But she cautioned this is constrained by the degree of freedom we have to do so.

She explained, “Human flourishing is a matter of not only private but also of public autonomy — meaningful participation in collective decision making.”

A healthy democracy depends on what Allen calls a virtuous circle, consisting of political institutions, civil society and political culture all working together. She believes it is not the institutions that are broken, but our culture.

Allen shared statistics demonstrating this broken culture such as diminishing trust of government and increased polarization of America.

“The starkest data point of all concerns changes in whether Americans consider it essential to live in a democracy,” Allen said.

She attributes this to a waning of civic education in schools and said the U.S. has downshifted from delivering free courses in civics to most high school students in the mid-twentieth century to now delivering one single semester course to approximately 85% of students.

As statewide tests increasingly favor math and language art skills, this does not incentivize schools to invest in civics education. She calls this, “how we accidentally lost the Cold War,” in which consequently after the Cold War, the U.S. began to largely emphasize STEM education in the interest of global competitiveness and security.

This emphasis on stem education Allen argues has “eroded our civic capacity.” She showed graphs in which higher SAT maths scores correlate with lower degrees of civic capacity and participation. Although she does believe that our system needs STEM competitiveness, Allen contends that we also need to maintain a culture that is befitting to our constitutional democracy.

“Though we won the cold war by outspending the Soviet Union on technological and military developments and outcompeting them economically, we may in the process have accidentally given away our soul,” she said.

Referring back to the statistic regarding only about 30% of millennials believing it to be essential to live in a democracy, Allen suggests we need to flip this statistic and create a supermajority for democracy which she said starts with rebuilding civic education from scratch.

“We need to dig deep to restore the intellectual foundations of K-12 history and civics education,” she said. “This requires work on curriculum, professional development for teachers, and policy advocacy.”

“The idea is trying to explain how we can diagnose the detachment and division, and then try and explain how this can be remedied,” Garner said. “It seems like largely the idea is that it’s something like a pedagogical project which is her emphasis on civic education.”