4 CU professors given honor of distinction 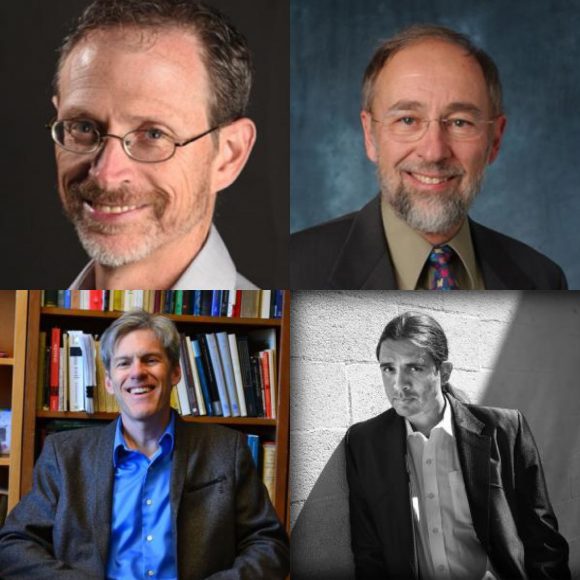 The University of Colorado Boulder honored four professors with the 2019 Professors of Distinction award in the Center for Academic Success and Engagement auditorium Monday afternoon. The award is an acknowledgment of their excellence within their respective fields. This year’s honorees were Noel Clark of the Department of Physics, Stephen Graham Jones of the English Department, Robert Pasnau of the Philosophy Department and Kenneth P. Wright Jr. of Integrative Physiology.

Each professor of distinction took turns addressing the audience. Pasnau was unable to attend this year’s event, although he is expected to speak next year.

James W.C. White, interim dean of the College of Arts and Sciences, began by introducing Pasnau’s work in philosophy. Pasnau, a founding member of the Benson Center for the Study of Western Civilization, has taught in philosophy since 1999. In 2018 he published a book titled “After Certainty: A History of Our Epistemic Ideals and Illusions.” This book is based on his Isaiah Berlin lectures at Oxford University in 2014.

White then introduced Clark, winner of the American Physical Society’s 2006 Oliver E. Buckley Condensed Matter Prize. Clark received his bachelor’s and master’s degrees in physics from John Carroll University and his Ph.D. from the Massachusetts Institute of Technology. Clark was a research fellow and assistant professor in applied physics at Harvard University until he moved to Boulder in 1977.

“I wouldn’t be here today if it wasn’t for Bill O’Sullivan,” Clark said.

Clark detailed how O’Sullivan, a solid-state physicist, and his colleagues came to the field of soft condensed matter — a result of what he called shortcomings in the construction of the Duane Physics building. Clark explained that it was the “productive and nice relationship with Bill” that really got their research program going.

White introduced the next honoree, Stephen Graham Jones. Jones received his Ph.D. in creative writing from Florida State University, which he completed in 2 years. He first came to Boulder in 2008 and began teaching fiction and screenwriting workshops. Throughout his career, Jones has published 15 novels and 6 story collections, as well as a number of novellas, comic books and chapbooks. He is particularly engaged in the horror genre.

As a preface to his anecdote, Jones said, “Being Indian is not a superpower. I mean, I wish it were.” Jones is a Blackfoot Native American.

He went on to lay out the plot of “Marathon Man,” a classic thriller novel by William Goldman about a runner who becomes entangled with Nazis. In the end, the runner “uses his running as a superpower,” Jones said.

“Writers are magicians, always slipping things into your pockets early on when you’re not paying attention, then pulling them out precisely when they need you to go ‘ah,’” said Jones.

Jones described his experience in writing workshops, noting that the workshop couldn’t stop talking about the protagonist of one of his stories being Indian. He explained that all of his characters had always been Indian, but “the story never prompted them to announce it.”

“They put on tragic glasses… their voices were all kinder, predisposed of pity and charity instead of carving up my pages as my pages needed carving up,” Jones said.

“Every once and again I’ll give a draft of a story or novel to someone and they’ll come back with that old saw, I’m always hoping isn’t a thing anymore. ‘Okay, so this character’s Indian but, why does that matter to the story? When will this Indianness activate?’” Jones continued.

He compared “Indianness” to the ability to run, again referencing Marathon Man. .

“Being Indian is not a choice,” Jones said. “You’re born Indian, you die Indian.”

The final speaker, Kenneth P. Wright, then took to the stage. Wright earned a Ph.D. in Behavioral Neuroscience from Bowling Green State University. He received postdoctoral training in the Division of Sleep Medicine at Harvard Medical School and Brigham and Women’s Hospital and was faculty at Harvard Medical. He came to Boulder in 2002.

Having published over 150 peer-reviewed articles, Wright gave the audience a taste of his most recent research.

Wright began with an introduction to the sleep cycle, which consists primarily of REM (rapid eye movement) and deep sleep. Our brains cycle through these stages but experience deep sleep early in the night and REM later in the night. He noted that when we sleep for less than 7 hours, we lose much of our REM sleep.

Sleep scientists use our bodies’ production of melatonin (a hormone sometimes taken as a supplement to fall asleep) to understand the timing of individuals’ sleep.

“We are the only species that, with the flip of a switch, can turn dark to day,” Professor Wright said. His research focuses on how this affects normal sleep patterns.

Wright discussed research conducted by his students on how sleep deprivation affects humans. His research explores the mechanisms behind the association of sleep deprivation with weight gain, obesity, diabetes and a plethora of other physical and mental health issues.

A study by his student Adam Wertz indicated that it takes us about 2 hours for our brains to wake up. Wright notes that after even 1 hour of insufficient sleep, performance decreases at a rate comparable to a blood alcohol level of .01%.

Consequently, a new study from their lab found that spring daylight savings time increased fatal traffic accident risk by 6%. Wright concludes by expressing that there is no way to “catch up” on sleep.

More information about the current and former recipients of the Professors of Distinction award can be found on the College of Arts and Sciences’ webpage.