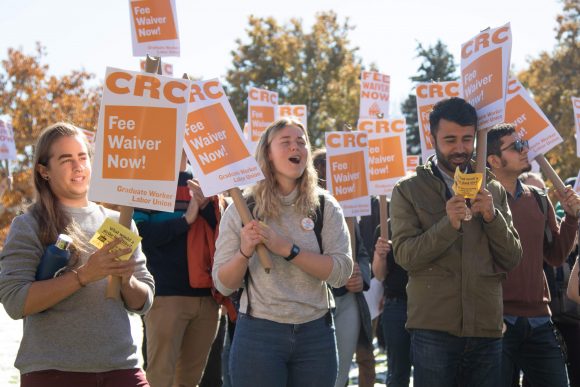 As tension rises between factions of graduate students and University of Colorado Boulder administration, the university has taken its first major step towards appeasing students’ demands with a recent proposal to “expanded benefits and some fee adjustments for graduate students (on appointment)” beginning in fall 2020.

The university said changes include multiple fee reductions such as the removal of the Student Information System (SIS) fee which costs $14 per year and a reduction in the Capital Construction fee by $45.20 which normally costs $245.20. It also includes an expansion of benefits such as parental leave for up to six weeks, up to 91% of dental care coverage and complete coverage of the RTD College Pass which currently costs $152.08. These changes are a continuation of efforts put forth in the last four years to address financial issues facing graduate students, led by the Graduate School in collaboration with the United Government of Graduate Students.

“We’ve made a number of stipend increases over the last few years which amount to something in the neighborhood of 8 million dollars,” said Scott Adler, dean of the Graduate School. “So we were looking of course at various opportunities in fee reductions, dental was something that students were looking for and parental leave, of course, that’s a big one – one we had recently provided for staff, so it was great we were able to provide this for the graduate students moving forward.”

Though the lowered fees and added benefits are being hailed by the university and Graduate School as a major win for graduate students, some still feel it is not enough. Members of the Committee on Rights and Compensation (CRC), an independent graduate student union, say they would like to see a waiver of all fees that students are required to pay. The fees, they say, hinder many students’ right to work and create an economic barrier in the graduate department.

“As graduate students, we’ve been making a lot of demands for a living wage, for better health care, for reasonable leave policies and the university has always ignored us,” said Tanya Roussy, a fourth-year graduate student and campus allies coordinator for the CRC. “So I’m hoping that if we unionize the whole campus system, we’ll be able to take back our power and make sure they can’t ignore us anymore.”

“As graduate students, we’ve been making a lot of demands for a living wage, for better health care, for reasonable leave policies and the university has always ignored us.”

The CRC has held multiple protests over the last year, the most recent being a week-long sit-in in the Regent Administrative Center that culminated in a walk-out and protest on Farrand Field in October.

“We try to look at these fees every year to see where there are opportunities to make reductions, or at least limit any increases,” Ho-a said.

Peter Shaffery, a fifth-year graduate student in the department of applied math and board member of the CRC, acknowledged that the new changes are a step in the right direction.

“Just with regard to the fee adjustments, I’m slightly excited,” Shaffery said. “Definitely glad to be paying around $200 less a year.”

Although he calls it a good start, he said remaining fees are still fairly high relative to any sort of comparable graduate program and believes that these fees still present a significant barrier for students who don’t come from as much money.

CU Boulder has historically refused to acknowledge the CRC as a union, according to Shaffery, which is why it has recently sought affiliation and charter with a national labor union.

“We’re transitioning from a period of being entirely a volunteer organization that operates by protesting, to more directly seeking a bargaining relationship with the university,” Shaffery said. “I think we’d like to, down the line, put legal teeth on the protests that we’re working on.”

Despite Shaffery’s support of the expansion of benefits, he is most frustrated by the process in which these decisions are made, which he describes as “entirely closed door.”

Changes are slated to be included in the entire budget package which will go before CU’s Board of Regents for final approval later this semester.