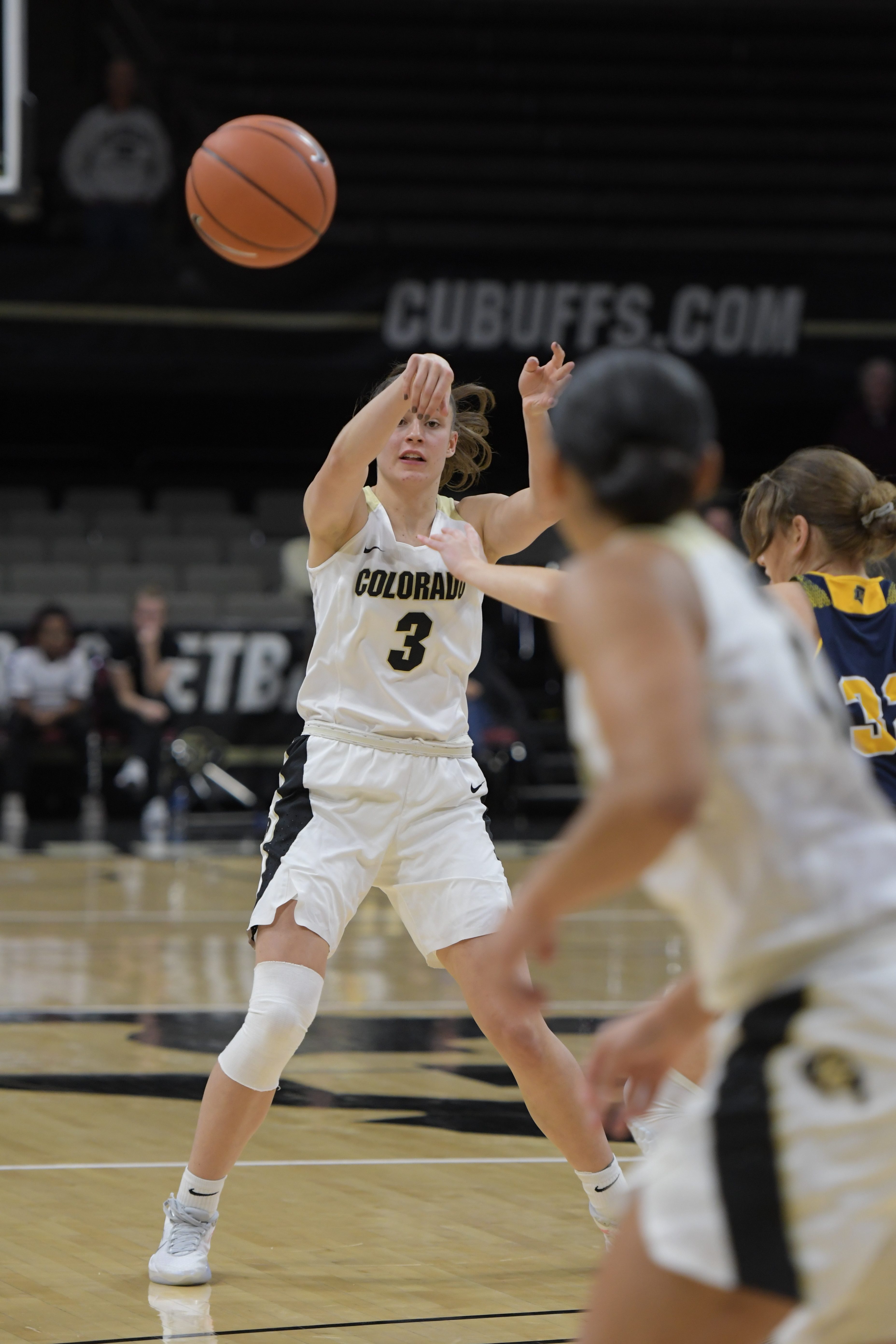 Emma Clarke throws the ball to her teammate, Lesila Finau during a game on Nov. 4, 2019. Clarke finished CU’s game against Texas as the leader in points, steals and blocks. (Vyla Carter/ CU Independent).

Coming off a solid win over Indiana State, the University of Colorado women’s basketball team extended their early-season success with a strong 74-50 win over the Texas Southern Tigers Tuesday night, pushing the Buffs impressive start to 7-0.

“I thought we did some really good things and kept our composure,” said head coach JR Payne. “A lot of really good, smart individual efforts tonight.”

The Buffs came out shaky in the first quarter, struggling to find their groove early on, going scoreless for the first minute and a half. Sophomore guard Emma Clarke then got the Buffs going with a jumper for CU’s first point of the game. Only about two minutes in Clarke and TSU’s Ciani Cryor battled for a loose ball, having words after the play was done. Both teams were sent to their respective benches, with Clarke and Cryor ending up with a foul each.

“It didn’t really affect my game that much,” Clarke said. “I just moved on and forgot about it.”

“I thought we did some really good things and kept our composure. A lot of really good, smart individual efforts tonight.”

CU picked up the intensity for the rest of the quarter, pressuring the Tigers relentlessly on defense. On the other end of the court, junior forward Annika Jank hit a three with two minutes left in the quarter, extending the Buffs lead and putting them up 17-10. With the shot clock counting down, redshirt sophomore guard Aubrey Knight knocked down a three to end the quarter with CU up 13, the score 23-10.

Like the first quarter, the Buffs remained scoreless during the start of the second. Freshman forward Charlotte Whittaker ended the drought, scoring on a layup. From there the Buffs took off, taking advantage of fast-break opportunities and ending the half with a comfortable lead, 41-20.

Throughout the rest of the game CU went to the boards, taking advantage of their height and TSU’s lack thereof. Junior forward/guard Mya Hollingshed led the team with 12 rebounds, tying her career-high. The Buffs ended the game outrebounding the Tigers by 17 points.

“We knew coming in they would try to swipe at the ball when we got rebounds,” Hollingshed said. “Our goal was to get to the glass and keep the ball high.”

Clarke kicked off the third quarter for the Buffs with a three early on. She went on to contribute two more threes that quarter. CU maintained their lead and went into the fourth up 62-36.

Clarke had major contributions on both sides of the floor for the Buffs. She covered her player full court and finished the game as CU’s leader in points, steals and blocks.

“I just came into the game happy,” Clarke said. “I know the steals and blocks and points came from the team.”

CU held on to their lead in the last quarter and sealed the game, 74-50. Looking forward, the team will experience their first road game with a flight on Thursday.

The Buffs take on Xavier on Friday at 5 p.m. MST in Cincinnati, Ohio.