‘The queen of campus’: Ralphie V remembered by her team for spirit, personality 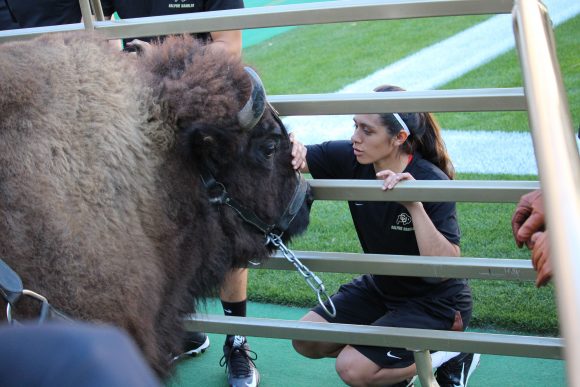 A thousand-pound buffalo and a football tradition unlike any other, the University of Colorado’s Ralphie run is a spectacle that ignites fans from Folsom Field and beyond. Tuesday marked the end of an era as CU announced Ralphie V’s retirement. A spunky, full of personality buffalo, Ralphie V has had more than a successful career at CU.

At 13 years old, Ralphie V’s retirement comes after 12 seasons of leading the Buffs football team as their live mascot. Fond memories from Ralphie handlers, runners and coaches characterize the one of a kind Ralphie V as the icon of the university.

“She’s the best,” said John Graves, Ralphie Program manager. “It’s an honor that I get to care for Ralphie V.”

Graves headed the program during a transition phase in 2007, when Ralphie IV retired, working closely to train her successor. Now nearly a decade later, Ralphie V’s retirement comes under unique circumstances. Rather than suffering from fatigue as she entered older age, Ralphie V’s stamina only increased. She’s is the fastest Ralphie to date.

“She’s been unique compared to the other Ralphie’s in that she’s actually sped up throughout her career,” Graves said. “She was so eager and excited to run that she was starting to leave her pen and run before we wanted her too.”

For Graves and her heders, the length of her career and force in which she runs are a testament to what a powerful buffalo she is.

“She knows she’s the queen of the campus,” Graves said. “She acts like that when she runs out onto the field.”

Ralphie is meant to embody the great qualities of CU including tenacity, determination and spirit. Ralphie V embodied these to the max, always putting on a show for the student body who were eager to cheer her on during the game opener and at half-time.

“She knows she’s the queen of the campus. She acts like that when she runs out onto the field.”

“She is the great icon of the university,” Graves said. “Everyone looks to her leading the football team out onto the field and representing our great university.”

For the Ralphie Handlers, sometimes dubbed the “Ralphie Runners,” their bond with Ralphie V is strong and their memories plentiful.

Savannah Spakes is in her second year with the program and has run exclusively with Ralphie V. Looking back on her time with the retiring buffalo, she recounted her calm, cool and collected temperament when she’s not rearing to run.

“At showings, she is usually really calm or relaxed,” Spakes said. “She’s hanging out with her eyes closed and the little kids always ask if she’s sleeping or napping, she’s just is so relaxed and happy in front of people. She can be that calm.”

During her time as a handler, Spakes saw her relationship with Ralphie V become closer and more trusting as the buffalo got to know her.

“She’s just is so relaxed and happy in front of people. She can be that calm.”

“She’s not as trepidatious around me as she was as (when) I was a rookie,” Spakes said. “Being able to get up close to her and know that she knows who I am is really cool.”

Lewis Schiebel is a veteran on the team and in his fourth year of Ralphie running. For him, gameday runs have stuck out as his favorite memories with Ralphie V.

“Gamedays are always special,” Schiebel said. “The emotions and excitement, as well as the success we have, are always memorable.”

Unknown to many, a buffaloes personality can be quite complex.

“She’s dynamic,” Schiebel said. “She has moods and emotions just like a person.”

After spending four years with Ralphie V, Schiebel is familiar with the varying moods of the personality-packed buff.

“She’s dynamic. She has moods and emotions just like a person.”

“There are days she’s not trying to run us into the dirt,” Schiebel said. “Then other days she’s really fired up and we’ll go to practice or be at a game and she’ll run our tails off.”

After watching her speed increase and her ability to take cues from Ralphie runners decrease, Graves determined that retirement was the best option for her. The biggest and strongest Ralphie yet, she lived up to her iconic role within the university. As the team and CU says goodbye to Ralphie V, many prepare to say hello to Ralphie VI in 2020. Graves already knows what he’s searching for in that next buffalo.

“We’re mostly looking for a buffalo that wants to be around people,” Graves said. “Who wants to lead the football team onto the field.”