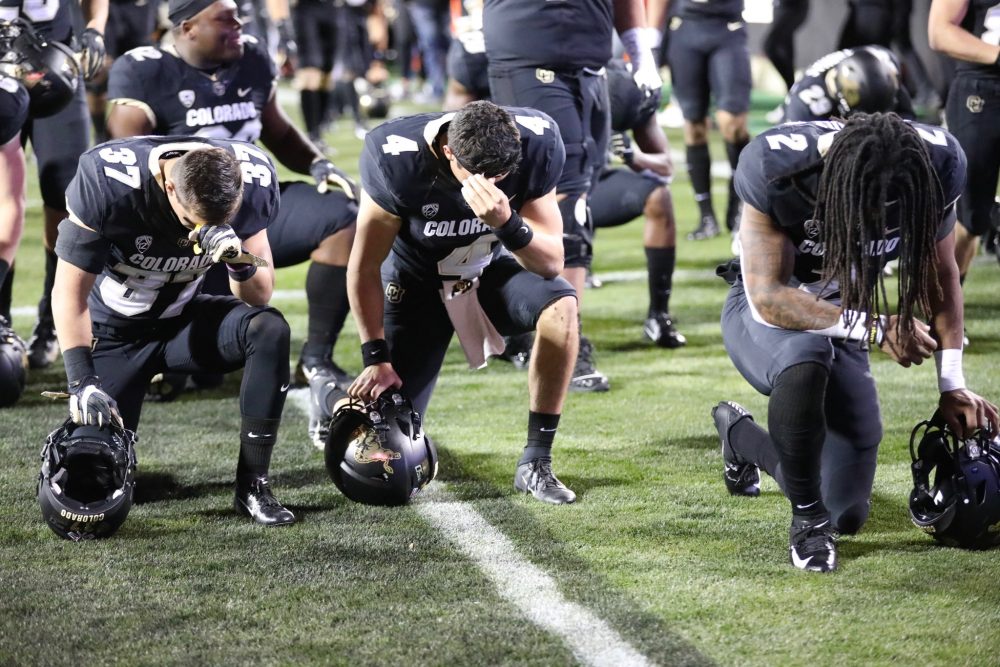 Members of the Buffs say a prayer prior to kickoff at Folsom Field. Oct. 25, 2019 (Nigel Amstock/CU Independent)

Coming off of a tough loss against UCLA, the University of Colorado football team returns to Folsom Field Saturday looking to bounce back with a win against the Stanford Cardinal for the annual homecoming game. Kickoff is set for 1:00 p.m. MST.

With the return of their star quarterback, K.J Costello, Stanford will look to build off of their win against Arizona in which they scored a season-high of 41 points. Costello threw for 312 yards and three touchdowns and will look to take advantage of a Buffs defense that has allowed 30 points or more in 14 consecutive games.

CU will rely heavily on their junior wide receiver Laviska Shenault Jr. and senior quarterback Steven Montez to exploit a Stanford defense that has allowed 28 points per game. A win for the Buffs would also break a five-game losing streak.

Playing Stanford for the first time since 2016, which ended in a 10-5 CU victory, the Buffaloes are looking for their first win against the Cardinal at home since 1990.

The annual Homecoming game also offers an important recruiting opportunity for head coach Mel Tucker and his staff. With the recent news of freshmen Alabama defensive end and former five-star recruit, Antonio Alfano announcing his intention to transfer to CU, all eyes will be on the Colorado defense that has allowed the second-most points in the Pac-12.

Three hours before kickoff, you can head to Duane Field for the official CU tailgate. Ralphie the buffalo will be there and you can enjoy the CU Marching Band and Spirit Squads.

Tickets and more information can be found here.